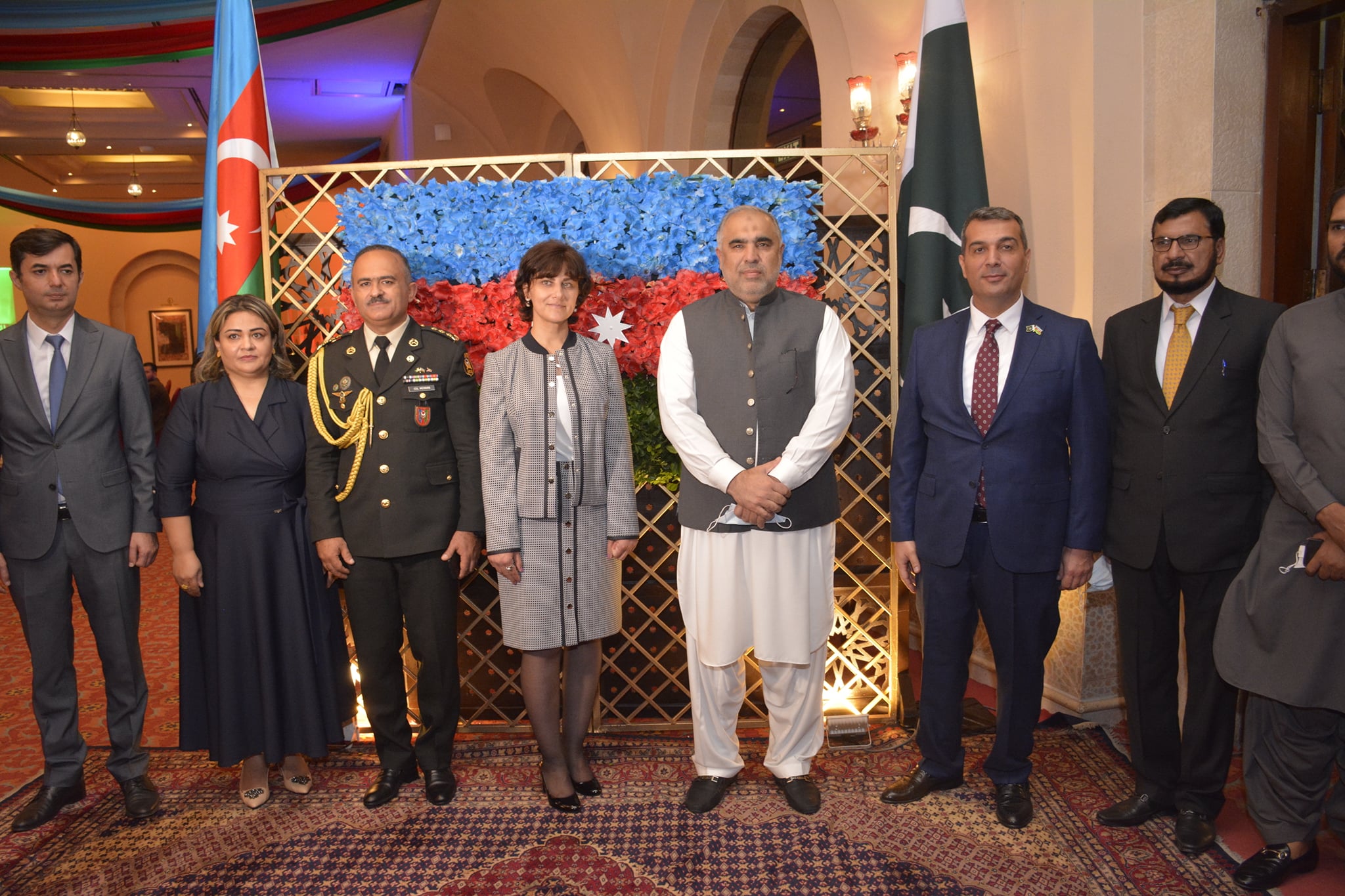 ISLAMABAD: Speaker of National Assembly of Pakistan Asad Qaisar has said Pakistan and Azerbaijan enjoy close brotherly relations, manifested by the tremendous goodwill existing between the leadership and people of the two countries. Our relationship is based on common faith, shared ideals and a mutual desire to live in peace and dignity. Whether it is the issue of Occupied Jammu and Kashmir or Karabagh, the fraternity of our countries has resonated together on regional and international platforms in support of each other. The whole world is witness to the strong bonds of fraternity that bind our two nations.

Speaker Asad Qaisar expressed these views while speaking on the occasion of 30th anniversary of restoration of independence of Azerbaijan.

He said, on 27 September, people of Azerbaijan commemorated the Memorial Day to honor their shaheeds who laid down their lives in defence of motherland.

In order to demonstrate our love for the brotherly people of Azerbaijan, the Remembrance Day was also celebrated in Pakistan. The building of Pakistan Monument in Islamabad which is the symbol of Pakistan’s unity and territorial integrity, was lit with the colors of Azerbaijani flag.

The victory of Azerbaijan in last year’s war was a remarkable feat. No wonder, the liberation of Azerbaijani territories was also celebrated in Pakistan.  The leadership, armed forces and people of Azerbaijan deserve appreciation for this accomplishment, he added.

He said, during his visit to beautiful city of Baku in July, a Memorandum of Understanding was signed between the two parliaments. This document has laid the foundation of a long term and sustainable cooperation. A trilateral meeting of Speakers of three brotherly countries of Azerbaijan, Turkey and Pakistan also took place during my visit.

Ambassador of Azerbaijan Khazar Farhadov in his speech said, this year, on October 18, the Republic of Azerbaijan celebrates the 30th anniversary of the restoration of independence.

History proves that maintaining independence is much more difficult than gaining it. In a one century Azerbaijan had to restore its sovereignty twice. The first time it was relatively short period, and the Azerbaijan Democratic Republic, the first republic in the Muslim world history established in 1918 but existed for only 23 months.

The ambassador further said, Azerbaijan was able to secure its state independence after the collapse of the Soviet Union in the 1991. The Constitutional Act on the State Independence of Azerbaijan was adopted on October 18, 1991 by the Supreme Council of the Republic of Azerbaijan. And Azerbaijani people gained their long-awaited freedom after years of oppression. On March 2, 1992, Azerbaijan became a member of the UN.

The first years of independence were not easy for the young sovereign country and faced enormous difficulties. On the one hand, the Armenian military aggression continued, on the other hand, the economy was paralyzed due to the collapse of the existing system. There were serious threats and risks to the Azerbaijani statehood. It was during this difficult period that the great leader of Azerbaijan Heydar Aliyev came to the power in 1993 at the insistent demand of my people. Great leader eliminated chaos and anarchy in economic and political life of the country. Independent Azerbaijan has outlined a new course of development, making the independence eternal and irreversible.

Today, under the leadership of President Ilham Aliyev, Azerbaijan is one of the fastest growing countries in the world.

And I would like to stress that Pakistan was one of the first countries that recognized the independence of Azerbaijan, demonstrating strong and valuable support over all these years.

During the Patriotic War government and people of Pakistan morally and politically supported us, National Assembly and Senate of Pakistan adopted resolutions condemning Armenian aggression and supporting Azerbaijan’s just position to restore its territorial integrity.

This is a true demonstration of brotherhood. Azerbaijan, fully supports the settlement of the Kashmir issue in accordance with the relevant UN Security Council resolutions.

He added, it was gratifying that the format of trilateral cooperation between the three brotherly countries, Azerbaijan, Pakistan and Turkey, established in 2017 at the level of foreign ministers, expanded towards the level of Speakers of Parliament, and also among Ministries of Defense.

Beside the brilliant bilateral and trilateral relations we have always had a tradition of cooperation in the international organizations as well. The main reason of this success is support of and respect to norms and principles of international law by our countries, the ambassador concluded.