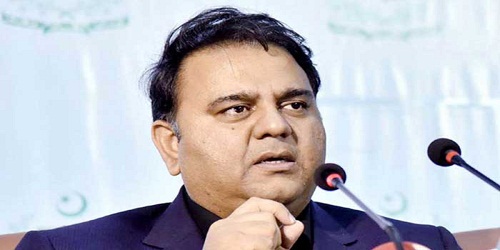 Islamabad : Minister for Information and Broadcasting Chaudhary Fawad Hussain has said that Pakistan attained economic growth despite the fact that the entire world is negatively impacted with the Coronavirus pandemic.

Talking to the media after attending the Pakistan International Film Festival in Karachi, he said for the first time the Federal budget was warmly welcomed because it was pro-poor and growth-oriented.

Fawad Chaudhary expressed the hope that the Sindh government would spend the funds provided by the Federation in the next year budget for the welfare of people.

He said it is not clear where the funds allocated by the Centre in the past were used as nothing on the ground in this regard is witnessed.

The Information Minister said the people of urban areas of Sindh, particularly Karachi, have been complaining of non-resolution of their grievances as the provincial government is not fulfilling its responsibility.