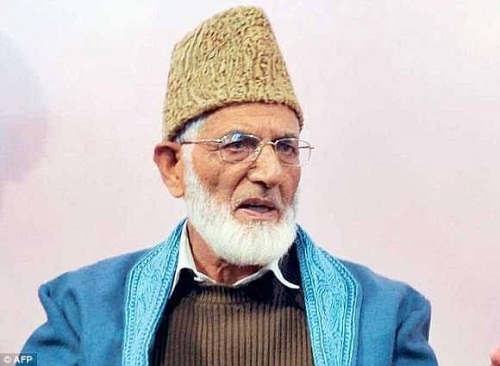 ISLAMABAD: Pakistan on Thursday condemned in strong words the “barbaric act” of snatching the mortal remains of the iconic Kashmiri leader, Syed Ali Shah Geelani, from his family by the Indian authorities.

Geelani was laid to rest in a tight military siege at Haiderpora in Srinagar early Thursday morning under the close watch of the Indian security forces. Indian authorities had put strict restrictions on people’s movement and the whole area was cordoned off.

Foreign Office Spokesperson Asim Iftikhar in a statement said, as the family was preparing for the last rites of Syed Geelani, that a heavy contingent of the occupation forces raided his residence in Srinagar, harassed family members and snatched Syed Geelani’s body.

“When the family members told the raiding party that Syed Geelani’s will was to be buried in the ‘Cemetery of Martyrs’ in Srinagar, they were reportedly told that India would not allow Geelani’s burial at the place of his choosing,” he said.

The FO spokesperson said the government of India is so afraid of Geelani and what he stood for, that they have now resorted to this inhuman act even after his passing away.

“This shows the degree of callousness on part of the Occupation Forces and demonstrates beyond doubt that India would trample all civil and human values in perpetuating its occupation of IIOJK,” the statement added.

Indian media subsequently reported that Geelani has been buried. A curfew has been imposed in the valley and all internet services suspended.

The spokesperson urged the international community to take serious note of this unprecedented and egregious situation in the Indian Occupied Kashmir and hold India to account for its breaches of international human rights and humanitarian laws.

Although Geelani and his family wanted him to be buried at the Cemetery of Martyrs in Srinagar, Indian authorities did not allow it, fearing agitation from people of occupied Kashmir.

He was buried just a few meters away from his house in Haiderpora, Srinagar.

A small number of people mainly some close relatives were allowed to participate in the funeral prayers and to have a last glimpse of the martyred leader.