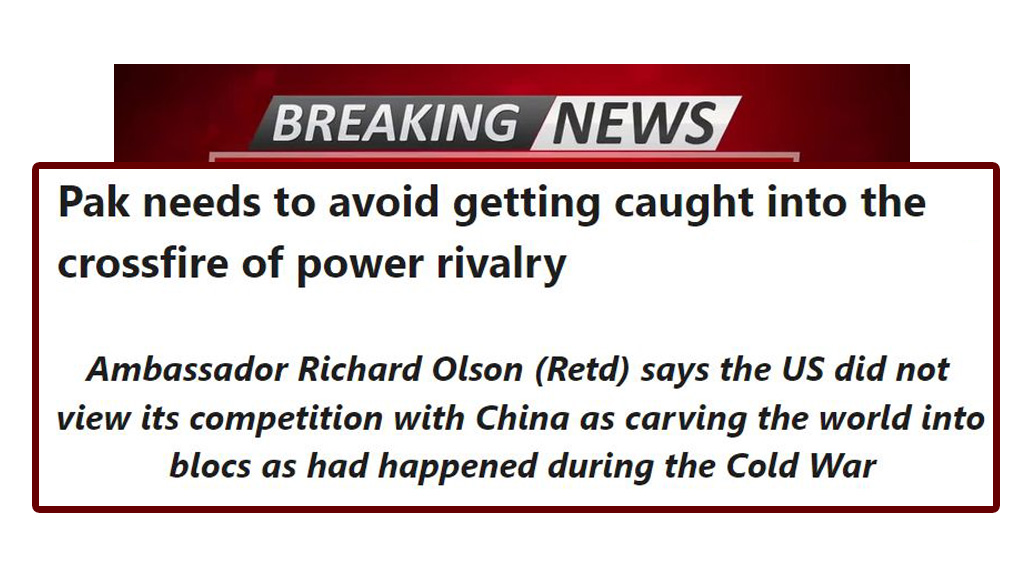 ISLAMABAD: Pakistan needs to avoid getting caught into the crossfire of the great power rivalry in the Asia Pacific region and should not be forced to pick sides in the emerging security dynamics between the US and China.  This was the key message of leading diplomats, former senior military officers, and eminent intellectuals at the International Seminar on “US’ Indo-Pacific Shift: Risks and Opportunities for Pakistan” organized by the Centre for Aerospace & Security Studies (CASS) in Islamabad.

President CASS Air Marshal Farhat Hussain Khan(Retd), while delivering the Opening Addresshighlighted the evolution of the US’ Indo-Pacific shift and assessed the situation from a historical perspective. While analyzing US interests in the region, he stressed that the world was witnessing the implementation of the US’ Indo-Pacific Strategy in the form of accelerated regional alliance formation, close security cooperation and large-scale military build-up in Asia-Pacific. He also touched upon China’s “Five Principles of Coexistence” and emphasized that these contrasting world views of two contemporary great powers reflected two different civilizational cultures and would have far-reaching impact on geopolitical, geo-economic and geostrategic spheres. The President concluded that US’ unilateral approach towards India was very destabilizing for conflict resolution in South Asia making Indian leadership more arrogant and reluctant to resume dialogue with Pakistan on outstanding issues like Jammu & Kashmir.

In her Keynote Address, Senator Sherry Rehman maintained that of three great meta-trends, the digital age was the most important which was transforming the nature of power, andbending history in non-traditional paths. Commenting on the US’ Indo-Pacific tilt, Senator Rehman warned that the American neuralgia to contain the rise of China would force many countries to make umbrella choices based on military binaries.  She noted that the US had made a clear decision to ally with India in multiple domains including space, defense, maritime and was now bound to India through its powerful diaspora. This, according to her, was an economic dominancethat had made the two countries’strategic alliancecompletely in sync with each other. On Pak-US relations, she lamented that Pakistan was viewed from the prism of Afghanistan and treated as a mistrustful, transactional “frenemy”, which she termed the “anti-hero of all allies.” She cautioned against forcing regional countries to make zero sum choices between Washington and Beijing and stressed that interdependence should be the way forward. “Pakistan must walk away from making emotional decisions and should focus on the rational,” she urged.

Speaking from Washington, Ambassador Richard Olson (Retd) underlined that the US did not view its competition with China as carving the world into blocs as had happened during the Cold War. He stressed that US competitionwith China was not militaryrather, it was economic, and the former was willing to cooperate with China where it could such as on climate change, COVID-19, Afghanistan, and strategic stability. According to him, there existed a realization in US policy circles that asking countries to choose between US and China was unrealistic. Nonetheless, there was a growing consensus in Washington that China’s rise was aprincipal foreign policy challenge. This bipartisan concern was sharpened by the perception that China was pursuing policies inimical to American interests in the Indo-Pacific region. He concluded that although Pakistan did not fit into the Indo-Pacific, Pakistan and the US could continue to cooperate on counterterrorism.

Admiral Mohammad Asif Sandila (Retd)provided a comparative assessment of China’s Belt and Road Initiative (BRI) and the US’ Indo-Pacific shift and stated that the former was fast developing connectivity projects,whereas the latter was marred by security concerns. He stressed that China’s stability depended on naval power and added that Beijing had learnt from the Soviet example and would avoid a confrontation with the US. While analyzing the security dimension of regional shifts, Admiral Sandila highlighted that the Indo-Pacific would gain more importance in the future given the US’ policy shiftand China’s economic connectivity projects in the region. In his assessment, energy reserves would play a very important role in this regard as it was estimated that 70% of oil and 50% gas reserves were located there.

Ambassador Jalil Abbas Jilani(Retd) advocated that Pakistan needs to assure the Americans that itwould continue to play the role of a bridge between the US and China and not play one against the other. On the other hand, he also warned against the challenges of being forced to choose sides and acknowledged that due to ideological, cultural, economic, security and political factors, the US-China confrontation would continue for a long time. He added that Pakistan’s challenges vis-a-vis this rivalry would have economic and security dimensions, especially in terms of sustaining economic cooperation with China while retaining Western goodwill. Ambassador Jilani pointed out that expectations from any quarters that Pakistan would opt out of the China-Pakistan Economic Corridor (CPEC) or distance itself from China were entirely misplaced. “It will never happen. CPEC will transform Pakistan economically,” he stressed.

While delivering theConcluding Address, Ambassador Inam ul Haq(Retd)highlighted that there were various levels of pressure in US-China bilateral relations, including areas of potential confrontation such as Taiwan, South China Sea, and Indo-China borderdispute. The US was also exerting pressure on China on human rights issuesand had initiated a trade war that included the imposition of anti-dumping duties, high tariffs, sanctions, efforts to decouple the two economies and intensifying tech war. He added that the most concerning pressure was in the area of geo-economics that had forced China to create an alternative economic system. Ambassador Inam recommended that Pakistan should apply for the membership of G-20.

The International Seminar was attended by a large number of diplomats, senior military officers, heads of various think tanks, scholars, journalists and students, who actively participated in the interactive question and answer session.