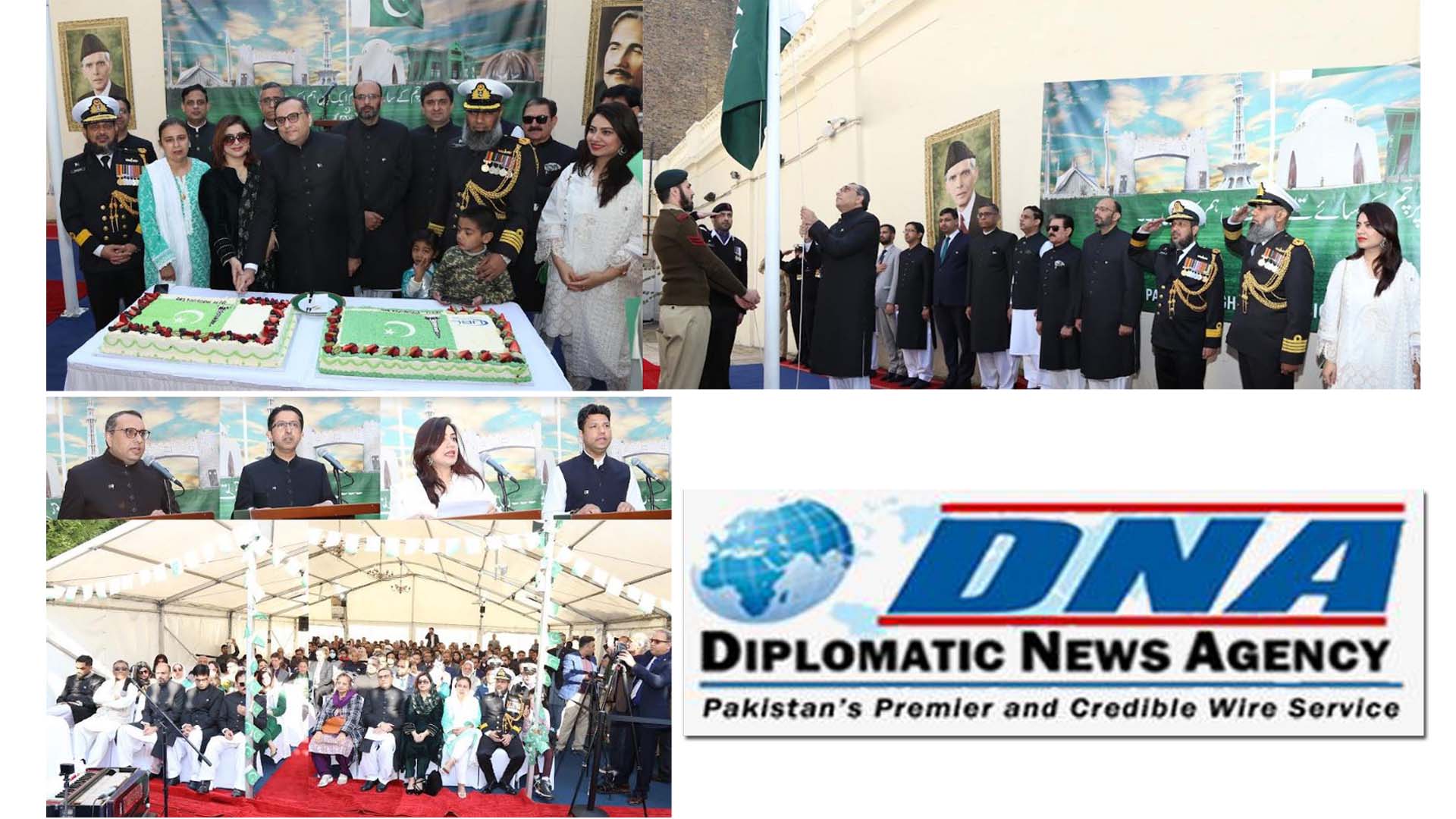 LONDON, MAR 23 /DNA/ – To mark the 82nd anniversary of the Pakistan Resolution, a flag hoisting ceremony was held at the Pakistan High Commission London, today.
Dr Faisal Aziz Ahmed, Charge de’affaires hoisted the national flag. Messages of the President and the Prime Minister of Pakistan were also read out on the occasion. A large number of Pakistani diaspora and the British friends of Pakistan attended the ceremony.
In his address on the occasion, Charge de’affaires extended heartiest felicitations to the British Pakistanis and termed the Pakistan Resolution a turning point in the history of Pakistan movement. He said that 23 March 1940 marked not just the launch of our national struggle for independence and self-determination, but also the beginning of our journey as a nation to realize our national aspirations. He paid glowing tributes to Quaid-i-Azam Mohammad Ali Jinnah, Allama Iqbal and other founding fathers, who, through their unwavering resolve and visionary leadership, created Pakistan.
Charge de’affaires said that despite daunting challenges, Pakistan continued to move forward as a progressive and democratic country. He said Pakistan was poised to march ahead with confidence and conviction as a responsible member of the world community, a global peacemaker, and a geo-economic hub for the entire region and beyond.
Dr Faisal Aziz Ahmed said that at a moment of unprecedented strife and uncertainty in world affairs, Pakistan stood for peace, equality, and justice with firm belief in the principles enshrined in the UN Charter. He particularly highlighted the grave human rights violations of the Kashmiri people being committed with complete impunity by Indian occupation forces in Indian Illegally Occupied Jammu and Kashmir (IIOJK) and emphasized on the need for a just resolution in accordance with the relevant UN Security Council resolutions.
Speaking about Pakistan-UK relations, Charge de’affaires noted the two countries were steadfast friends and strong partners in multiple domains and at multiple levels. He said that it was a matter of great joy that this year marked the happy confluence of Her Majesty the Queen’s Platinum Jubilee, the 75th independence anniversary of Pakistan and 75 years of enduring friendship between Pakistan and the United Kingdom. Charge de’affaires lauded the constructive role of 1.6 million Pakistani diaspora in the UK in cementing bilateral ties. He hoped that the two countries would continue to work together to take existing relations in fields of trade, investment, culture, and tourism to the next level.
A celebratory cake was cut by Charge de’affaires and his spouse while local singers presented popular national songs. The guests were served with traditional Pakistani cuisine.
The Consulates of Pakistan in Birmingham, Bradford, Glasgow and Manchester organized similar flag hoisting ceremonies.

« Imran has to go for the country to progress: Bilawal (Previous News)
(Next News) Sadiq Sanjrani receives Foreign Ministers of Iraq, Kazakhstan and Kyrgyz Republic »