On the fast Finnish roads, Ogier can seal eighth title 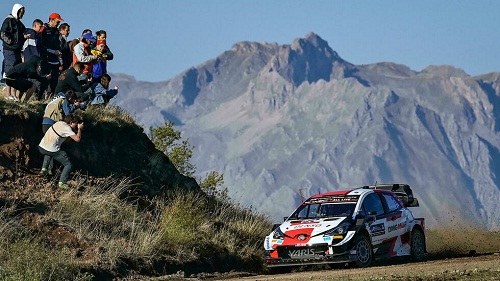 Paris, Sept 30 :If results fall completely his way, Sebastien Ogier could clinch his eighth World Rally title in nine seasons with two rounds to go in Finland this weekend.

The Frenchman, who has announced he is retiring after this season, is 44 points ahead of Welsh Toyota team-mate Elfyn Evans, 50 ahead of Belgian Thierry Neuville of Hyundai and 51 ahead of the revelation of the season, Finn Kalle Rovanpera, who also drives for Toyota.

With a maximum 30 points available if he wins and takes the power-stage bonus, Ogier could build a lead of 61 points or more and go into the last two rallies of his career, in Spain and Italy, already champion.

Yet Ogier has only won the “rally of the 1000 lakes” once before, in 2013. A more realistic target could be protecting his lead and then clinching in two weeks in Catalonia, where he sealed his 2014 and 2016 titles.

“Nothing is decided in the championship yet, so let’s see what approach we will take on this rally, but I’m looking forward to driving those roads in this car,” said Ogier.

To allow fans to attend, the rally was moved from its usual midsummer dates to October for the first time, while an Arctic Rally was added in the country in February.

The Finland Rally is one of the fastest on the calendar: a sprint on gravel punctuated by spectacular jumps.

But the autumn dates mean cooler, wetter conditions are likely and some stages will be run after nightfall.

“We can expect the grip from the stages to be lower than usual, and if the weather is bad it could be very slippery,” said Jari-Matti Latvala, the Toyota team principal and a Finn.

The Toyota team, Latvala pointed out, are based in Finland.

“Our car has been developed on Finnish roads and we know that we should be strong there.”

Neuville has finished runner-up to Ogier four times in the championship without collecting a title. He also came second in 2019.

“One of the high-speed events in the season, one of the challenging events for myself,” said the Belgian. “But I still enjoy the driving, at that speed with the jumps and the precision you need…it makes it very special.”

Evans finished runner-up last season after crashing out of the season finale.

“The speed is always a shock,” said Evans. “Regardless of how much testing you do before the event, when you get going and start the stage then it’s very fast.

“The Finns, generally speaking, tend to settle in a little bit quicker than anybody else and that’s the key.”

Estonian Ott Tanak, a Finnish resident who interrupted Ogier’s title reign in 2019 and who won the Arctic Rally this year and the Finland Rally in 2018 and 2019, agreed.

“One of the biggest challenges is the speed and the big jumps, it’s always important to get the confidence very early as it’s so fast it’s difficult to get big gaps,” he said.

A more likely local contender is the 20-year-old Rovanpera, who became the youngest ever rally winner in Estonia in July and then won again on the last outing in Greece.

This will be his first Rally Finland and gives him an opportunity to shine on home ground. He was born in Jyvaskyla, where the rally operates from.

“Driving Rally Finland in a World Rally car is going to be one of the coolest things for me in my career so far,” said Rovanpera.

“It’s going to be really nice to see the fans cheering for us on the stages.”