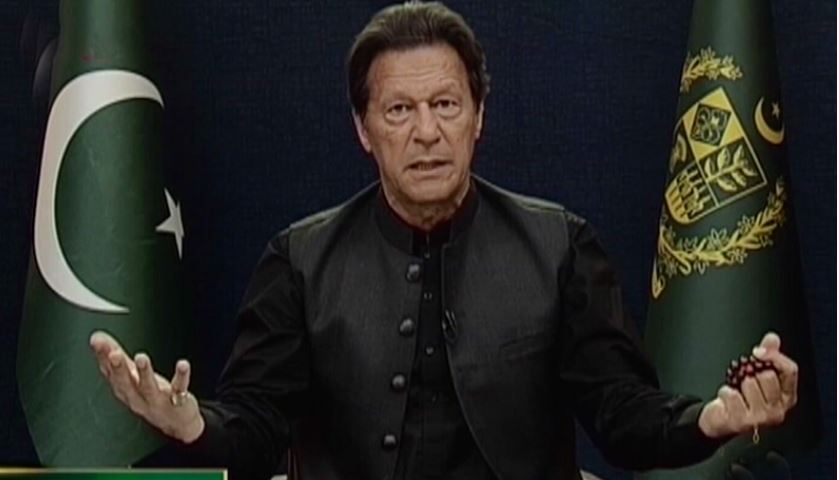 ISLAMABAD: Prime Minister Imran Khan on Saturday urged the country’s youth to stage “peaceful protests” against a “foreign conspiracy” allegedly hatched against his government and said that he has “more than one plan” for tomorrow’s crucial vote on the no-confidence motion against him in the National Assembly.

The prime minister made these remarks during a live question and answer session, which began a little before 5:30pm, was broadcast live on television, radio and digital media, and lasted roughly an hour. “Before taking your telephone calls, I want to talk to the people of my country for five minutes because right now Pakistan is standing on a decisive point,” the prime minister said in his opening remarks. “This is a war for the future of the country.

“There are two routes we can take. Do we want to take the way of destruction or a path of pride? There will be difficulties in this path but this is the path of our Prophet PBUH. This path is for our good. This path brought a revolution in the country.”

The prime minister then discussed the political crisis in the country: “The politics of Pakistan has reached a point today where the nation has to decide where you want to take the country today. A society that stands with honesty and justice takes a new life. But when a society becomes neutral, it begins supporting the bad.

“There’s a conspiracy against the government right now and it has been proven that politicians are being bought like goats to topple the government. The conspiracy started abroad and here Mir Sadiqs are helping these people abroad.

“The history never forgets those. And I want Pakistan’s history to not forget these traitors either. It is your responsibility. Don’t let them feel that you have forgotten.”

The prime minister said he will take legal action against those who “betrayed the nation”. “I met my lawyers today and we have a plan. We wont let them go free. All of them will be punished. We will decide by tonight the kind of legal action we want to take against them.”