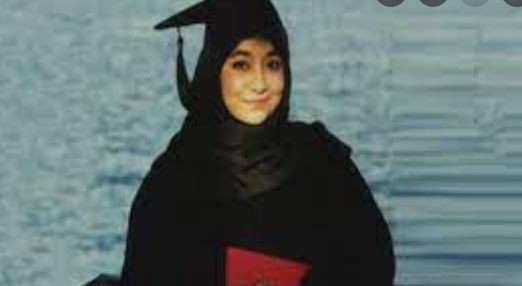 KARACHI, MAR 21 (DNA) — A demo of civil society in front of the Karachi Press Club (KPC) here on Sunday urged the OIC-FM moot scheduled in Islamabad to pass a resolution to demand early release of Dr Aafia Siddiqui, a Pakistani mother and educational scientist presently languishing in a US jail.

The demo was arranged by the civil society members who chanted slogans in favour of Dr Aafia release. Addressing the demo, the speakers said Dr Aafia was an innocent victim of so-called war on terror. They said when the war has already been ended and invader forces have left Afghanistan, what is the reason of keeping Aafia Siddiqui in jail.

They said she should be released immediately and allowed to join her family and children. They said the aging mother of Aafia is ill and she should be given a chance to see her daughter after long 19 years.

They said the OIC countries should realize that Dr Aafia is a Muslim woman and raising a strong voice for safeguarding her basic human rights is individual and collective responsibility of all Muslim countries.

They said the silence of the Muslim world on the issue of Dr Aafia is just sad and disappointing and this mum should be broken now. They said we warmly welcome the OIC delegates in Pakistan and we hope that they would take the issue of Dr Aafia also during their deliberations at the OIC-FM moot in Islamabad and pass a strong resolution for her early release.

They said that people of Pakistan especially and peace loving people of whole world generally are very much concerned about the issue of Dr Aafia and protests, rallies and demos in this regard are being held in whole world including the capitals of the West.

They said that the people of Pakistan expect from the OIC countries to show greater sensitivity to Aafia Siddiqui issue and this sensitivity should manifest at the OIC-FM moot in Islamabad. They said we expect from the host government, as well as, the guests not to forget and ignore the hapless daughter of the Ummah, Dr Aafia, on this occasion.

They said the release of Dr Aafia Siddiqui would further improve relations of the US with the Muslim world, especially Pakistan and result in lesser tensions and heartburning and better people-to-people relations between the people of different faiths and cultures which would be a good omen for world peace. They appealed to the world leaders in general and OIC-FM leadership in particular to play their due role in early release and repatriation of Dr Aafia Siddiqui.