UNODC believes that the Victim Reception and Facilitation Centre at the Taftan Border will immensely enhance FIA’s capacity to protect and assist victims of trafficking and vulnerable smuggled migrants: Milsom

The construction of the VRFC was successfully completed during the third quarter of 2021, and it was handed over in a ceremony on August 31st, 2021, to the FIA in Taftan by UNODC.

VRFC is located at Taftan which is a key transit point for irregular migrants from Afghanistan and Pakistan intending to reach Europe. As per the MOU between the FIA and UNODC Country Office Pakistan, FIA provided land for the project while construction was carried out by UNODC with the financial support of the Kingdom of Norway. After the construction, FIA deployed 20 officers at the VRFC as per agreement.

Dr. Jeremy Milsom, Representative, UNODC Pakistan, addressed the participants at the inauguration. He said, “UNODC believes that the Victim Reception and Facilitation Centre at the Taftan Border will immensely enhance FIA’s capacity to protect and assist victims of trafficking and vulnerable smuggled migrants along this route. A total of 2857 deportees have already been accommodated at VRFC since the handover in August 2021, according to the data received from FIA Balochistan.” He thanked the Kingdom of Norway for their support for the VRFC project expressing his desire to continue a close and enduring relationship in the future.

Director-General FIA, Dr. Sanaullah Abbassi remarked, “Pakistan has long been exposed to the wide-ranging consequences of human trafficking and migrant smuggling internally and from neighboring Afghanistan. With the current political situation in Afghanistan, it becomes more important to synergize the efforts in our region, among the regional countries and with international partners such as UNODC.”

Her Excellency Ms. Maha-Noor Khan, Deputy Ambassador, Royal Norwegian Embassy Islamabad, said, “Norway is honored to have been part of the development of this important Reception and Facilitation center in Taftan. Irregular migration to Europe puts these vulnerable people in a dangerous situation. We, therefore, welcome Pakistan’s effort to combat human trafficking and migrant smuggling. We appreciate the close partnership with UNDOC and look forward to further cooperation with FIA regarding this international and multi-dimensional crime.”

Speaking about FIA’s long partnership with UNODC, Mr. Sardar Zaheer Ahmed, Director Anti-Human Smuggling FIA, stated, “FIA, with the support of UNODC, is strengthening its response against TIP and SOM through the National Action Plan to combat TIP and SOM (2021-25), developed in close assistance with UNODC.” 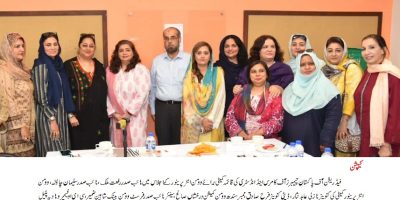