No one to be allowed to stage sit-in in Capital: Rasheed 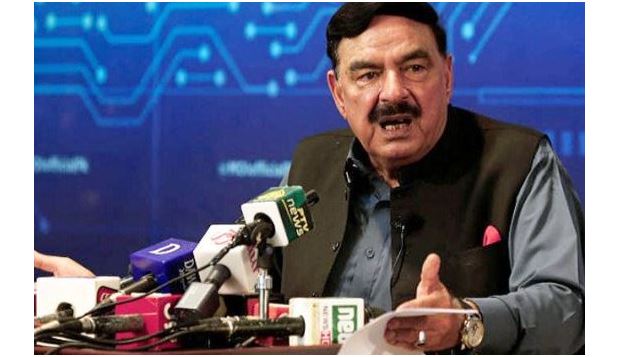 ISLAMABAD, Mar 26 (DNA): Minister for Interior Sheikh Rasheed Ahmed
while reiterating complete security to the Opposition rally on Saturday
categorically said that no one would be allowed to stage sit-in in the
federal Capital.

Addressing a press conference here, the minister said that 15,000
personnel of Rangers, Frontier Constabulary (FC) and police were deputed
for maintenance of law and order in the Capital.

Srinagar Highway has been handed over to the Rangers and FC and it was a
good omen that Jamiat Ulema Islam (JUI-F) has shifted its stage to H-9
Bazar from the highway, he said.

He said a JUI-F Senator has given assurance that they would abide by the
laws and regulation. Permission was given to JUI-F for today rally only
and no application is yet submitted for their tomorrow rally, he said.

The minister said PML-N has sought permission to hold rally at the
Srinagar Highway but was not allowed as the Apex Court and High Court
have already directed the Interior Ministry and local administration to
keep all main thoroughfare including Srinagar Highway opened. The
courts’ directions would be strictly followed, he added.

He said that complete security would be provided to the rallies but no
one would be allowed to block the roads. However, no one will be allowed
to enter the Red Zone, he added.

The minister said mostly probably, the voting on no confidence against
the Prime Minister will be held on April 4 if it was tabled on March 28
in the House. Complete security will be given to all the members, he
said.

He expressed the hope that Imran Khan would emerge victorious and all
government allies would decide in favor of the Prime Minister.

Rasheed said the DG FIA has been directed to arrest MNA Jam Abdul Karim
who was nominated in murder of journalist Nazim Jokhio soon after his
arrival from Dubai. The accused MNA will be handed over to Sindh police
after taken into custody for further legal procedure, he added. He said
that Jam Abdul Karim would not only be arrested but also his name would
be put in exit control list (ECL) besides providing it to Interpol.

He urged all political parties to show their political maturity and
avoid any confrontation. He said currently there was no need to deploy
army but made it clear that under Article 245, armed forces could be
summoned with the approval of federal cabinet and PM.

The minister said the courts have directly put the responsibility on me
and the Interior Ministry for maintenance of law and order in the
Capital. He said the ruling party Pakistan Tehreek-e-Insaf (PTI) has
also been allowed to hold public gathering on March 27 which would be
addressed by Prime Minister Imran Khan.

Replying to a question, the minister said that he had advised the Prime
Minister to impose Governor’s rule in Sindh and declare emergency but
the Prime Minister rejected his advised. Keeping in view immense
popularity of Imran Khan, he said that he would advise the PM to go for
early general elections also after giving poor-friendly budget.

To another query, he said that talks were going on with all allies and
estranged PTI lawmakers.

He said he would personally lead a mammoth procession from Rawalpindi to
participate in the scheduled PTI gathering at Parade Ground on March 27.
“I am firmly standing with Prime Minister Imran and will bring a biggest
rally from Rawalpindi to the main rally,” he remarked.

To a separate question, the minister said that stern action would be
taken those who had started malicious campaign against armed forces. DNA