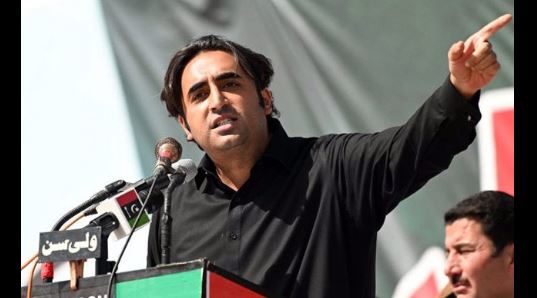 Declaring himself heir of the martyrs of Pakistan, Bilawal defiantly
said he would never bow down before the terrorists. “And neither will I
surrender to ‘selected’ prime minister and his government,” he said
categorically.

He was of the view that Imran was not the prime minister of the people
of Pakistan. “Injustice was done by imposing him on the nation,” he
commented.

PPP chairman said now when he (PM Imran) had lost majority in the
National Assembly, he had lost his senses. “This ‘coward’ is wandering
here and there in search of support,” he added.

“What type of state of Medina is this where farmers do not have
fertilizers; where 10 million jobs were not given despite promise, and
the people are in deep pain because of massive inflation?” he
questioned.

Truth of the matter was that, he went on to add, this was not the
‘change’ ‘selected’ premier had promised, but ‘destruction’. “What kind
of ‘change’ is this where there is relief for the rich, and miseries for
the poor,” Bilawal asked.

PPP chairman said that the prime minister’s politics was characterized
by using indecent language against others and levelling allegations
against them. “Is it an appropriate behavior?” he asked.

Bilawal said that PPP would never give up its struggle against the
government but would face it. He claimed that the results of recently
held local bodies’ elections in Khyber Pakhtunkhwa (KP) had showed that
the people had rejected the party.

PPP chairman asked the prime minister to compete with the opposition
parties in the parliament, rather than outside the parliament. “Imran,
if you have the sportsman spirit, then face the no-trust motion against
your government,” he challenged.

He was of the view that no other country’s agent had caused as much
damage to Pakistan as this man (Imran) had done.

He asked whether the prime minister had fought the Kashmir case. “He
always prides himself on fighting the case of Kashmiris. But instead of
becoming their ambassador, he became the ambassador of the Indian agent,
Kulbhushan Jadhav,” PPP chairman alleged.

He threatened the prime minister that if he, what he called, kept
telling lies to the nation about the opposition, then the opposition
parties, too, would expose the first lady’s ‘stories of corruption’.

Accusing the PTI of running a campaign against the country’s secret
agencies, he said that the opposition would never allow the ruling party
to malign the state institutions. DNA

« Pakistan Research Center and CUC open office in Islamabad (Previous News)
(Next News) No one to be allowed to stage sit-in in Capital: Rasheed »