NAB committed to ‘accountability for all’: Chairman 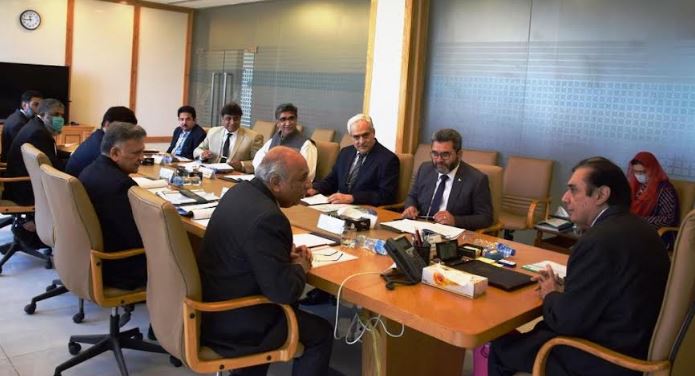 Islamabad, MAR 29 /DNA/ – The Honorable Mr. Justice Javed Iqbal, Chairman NAB chaired a meeting to review performance of Prosecution Division and Operation Divisions of NAB at NAB Headquarters. The meeting was attended by Zahir Shah, Deputy Chairman NAB, Syed Asghar Haider, Prosecutor General Accountability (PGA) DG Operations and other senior officers of NAB at NAB Headquarters. During the meeting, it was informed that Prosecution Division of NAB is working closely with Operations Division NAB Headquarters in order to have legal assistance to all Regional Bureaus of NAB in conduct of complaint verifications, inquiries, investigations, references and pending cases of NAB vigorously on the basis of solid evidence in the respected Courts as per law. During the meeting, it was informed that on the directions of the Chairman NAB, the Prosecution Division is being revamped by inducing experienced legal consultants/special prosecutors.

The Honorable Mr. Justice Javed Iqbal, Chairman NAB said that NAB has not only adopted “Accountability for All” policy  but 1405 accused persons were convicted by Learned Accountability Courts. He said that is determined for logical conclusion of mega corruption cases of money laundering, Fake Accounts, Assets beyond known sources of Income, Cheating public at large, illegal Housing/Cooperative Societies and Modarba/Musharka cases by utilizing all its resources as per law.  He said that 1237 references of NAB are under trial in the learned Accountability Courts with a worth of about Rs, 1335 billion. NAB has decided to file applications for early hearings of under trial cases. He said that out of 179 mega corruption cases of NAB, 66 mega corruption cases have been brought to logical conclusion while 93 mega corruption cases are under trial in the learned Accountability Courts of the country. He said that corruption is the root cause of almost all problems which undermines social, economic development and prosperity of the country. He said that NAB is the focal organization of Pakistan under United Nations Convention against Corruption (UNCAC) in order to weed out corruption and to make Pakistan Corruption free by adopting “Accountability for All” policy. He said that NAB is the Chairman of SAARC anti Corruption Forum. NAB has signed an MOU with China to oversee CPEC projects in Pakistan. NAB is regularly reviewing the performance of NAB through computer based specially devised state of art monitoring and evaluation systems but also physically inspecting through Chairman NAB’s Inspection and Monitoring Team (CIMT) to further review overall performance of NAB. Moreover, NAB has established its own Pakistan Training and Research Academy in which specialized training has been started to impart investigation officers as well as Prosecutors officers on modern lines in order to conduct investigations of cases of money laundering and white collar crime cases. NAB has also established an Anti Money Laundering Cell in NAB headquarters with main responsibilities to have compliance, monitoring, analysis and coordination with National FATF Secretariat and relevant stakeholders as per law.

He said that NAB has introduced a new concept of Combine Investigation Team (CIT) in order to benefit from the experience and collective wisdom of senior supervisory officers in order to further improve the standard and quality of inquiries and investigations on the basis of solid evidence as well as statements of witnesses and documentary evidence besides establishing state of the art Forensic Science LAB which has facilities of Digital Forensics, Questioned Documents and Fingerprint analysis. These initiatives of NAB are lending quality. NAB had devised a Monitoring and Evaluation System as well as a comprehensive Quantified Grading System in order to further improve the performance of NAB. He said that NAB has prescribed a 10 months timeframe for completion of investigations and subsequently filing of references on the allegations of corruption and corrupt practices. NAB has also established Witness Handing Cells in all its regional bureaus. Due to this reason, NAB is vigorously pursuing its cases in the learned Courts on the basis of solid documentary evidence as per law. Chairman NAB directed all NAB officers to double their efforts to nab corrupt elements as eradication of corruption is our national duty. He said that Transparency International Pakistan, World Economic Forum, Global Pace Canada, PILDAT and Mishal Pakistan have lauded NAB’s efforts for eradication of corruption. As per Gilani and Gallup Survey, about 59 percent people have shown their confidence in NAB. The Honorable Mr. Justice Javed Iqbal, Chairman NAB appreciated the excellent performance of Operation Division and Prosecution Divisions, NAB Headquarters under the supervision of Zahir Shah, Deputy Chairman NAB and Syed Asghar Haider, Learned Prosecution General Accountability (PGA), NAB.