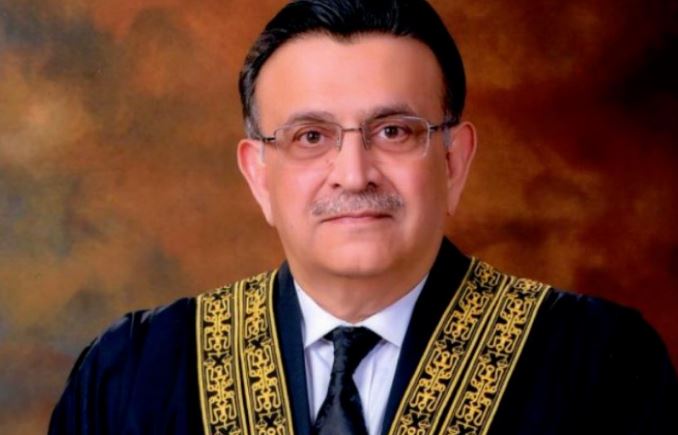 ISLAMABAD: Following the government’s tactics to delay the voting on the no-confidence motion against Prime Minister Imran Khan, a larger bench of the Supreme Court of Pakistan is set to hold a hearing in relation to the matter.

Meanwhile, Supreme Court Bar Association (SCBA) late Saturday night filed a petition in the apex court for the implementation of its order issued on April 7.

“In consequence of the said order of this August Court, the National Assembly was summoned to meet on 09-04-2022. However, on the said date, the Speaker of the National Assembly and in his absence Mr Amjad Ali Khan (Chairperson) failed to implement the order of this August Court dated 07-04-2022 in Suo Moto Case No. 01 of 2022. Particularly, instead of proceeding with conducting the vote on the motion for a vote of no-confidence against the Prime Minister, the Speaker and the Chairperson proceeded to have a discussion on the said motion. It is pertinent to mention that discussion on the vote of no-confidence against the Prime Minister was on the agenda of the National Assembly for 31-03-2022 as reflected by the Order of the Day for the said date,” said the petition.

The SCBA, in its plea, said that by not holding the vote on the no-confidence motion, the “speaker, the deputy speaker, and the chairpersons belonging to the PTI were “bent upon frustrating” the top court’s order.

In its plea, the SCBA has prayed to the court to “restrain the speaker, deputy speaker, and the chairpersons/chairwoman, namely, Amjad Ali Khan, Munaza Hassan and Imran Khattak from chairing the meeting and/or acting as the speaker in the current Session being held to implement” the court’s orders on the no-confidence motion.

The lawyer’s body has also appealed to the apex court to direct the secretary of the National Assembly to hold a session of the Parliament which is chaired by the MNAs that are not members of the PTI.

It has also appealed to the court to “restrain the prime minister or the Federal Government from passing any order” that may be contrary to the court’s April 7 order.

“Restrain the President of Pakistan from acting in pursuance of any advice rendered by the prime minister or the Cabinet, till such time the order of this August Court dated 07-04-2022 is fully implemented and complied with,” said the plea. It has also urged the court to “direct all state functionaries” to help in the implementation of the order.

“Restrain all State Functionaries from taking any extra-constitutional measures which are contrary to the principles laid down in the judgment of this Court in the case of Sindh High Court Bar Association vs. Federation of Pakistan etc. reported as PLD 2009 SC 879; Any other order that this August Court deems appropriate, under the circumstances, may also very graciously be passed,” concludes the plea.

It is worth mentioning that on April 3, NA Deputy Speaker Qasim Suri dismissed the no-confidence motion and on advise of the premier, President Arif Alvi dissolved the lower house of the parliament — as he had effectively lost the majority in the NA.

But despite the government’s manoeuvres to dismiss the no-confidence motion against the prime minister, the Supreme Court took suo motu notice on the matter and revoked all the decisions.

The Supreme Court of Pakistan restored the National Assembly on April 7 after it declared the government’s decision to dissolve the assembly and Suri’s ruling against the Constitution.

The top court had ordered speaker Qasier to summon the session on Saturday no later than 10:30am to allow the vote on the no-confidence motion against the premier.

But the decision is yet to be implemented.