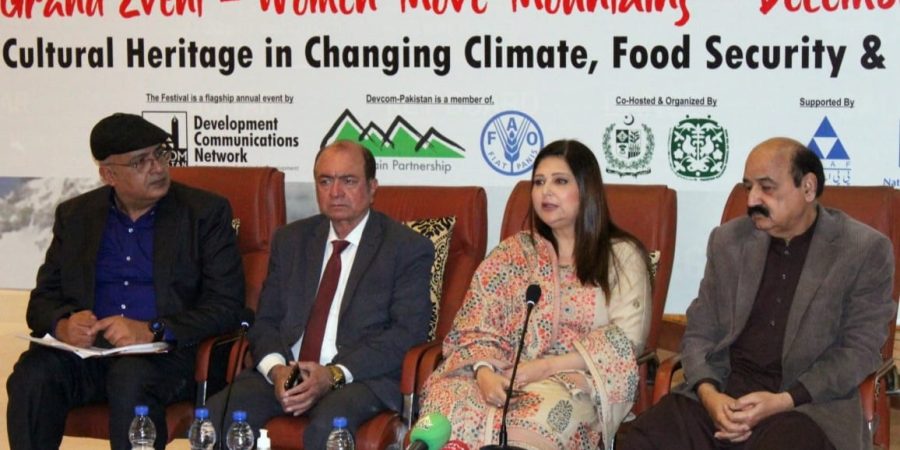 Rawalpindi – A live painting competition on the theme “Women Move Mountains” marked the opening of a two-week long 12th edition of Pakistan Mountain Festival (PMF) on Thursday at the Fatima Jinnah Women University. The festival is an annual flagship event of Development Communications Network (Devcom-Pakistan) to commemorate the UN’s International Mountains Day (IMD) that falls on December 11.

The participants painted mountain women’s struggle in combating real-life challenges in the changing climate, women in mountain ecosystem conservation, and cultural heritage from the northern parts of Pakistan. They depicted the impact of climate change on life in mountains besides the aesthetic value.

Speaking on the occasion, Devcom-Pakistan Executive Director and founder of Pakistan Mountain Festival Munir Ahmed said: “Mountain women play a key role in environmental protection and social and economic development in mountain areas. They are often the primary managers of mountain resources, guardians of biodiversity, keepers of traditional knowledge, custodians of local culture and experts in traditional medicine. Somehow, mountain women’s potential and contribution to conservation is undermined.

He said mountain women’s climate resilience shall be the focus to empower them to face the emerging challenges. Increasing climate variability, coupled with a lack of investment in mountain agriculture and rural development, has often pushed men to migrate elsewhere in search of alternative livelihoods. Women have therefore taken on many tasks formerly done by men, yet mountain women are often invisible due to a lack of decision-making power and unequal access to resources.

To trigger real change towards sustainable development, it is important to engage in gender transformative change. We need to empower mountain women so they can participate more effectively in decision-making processes and have more control over productive resources. By sharing excellence, opportunities and capacity development in mountains, the Day can promote gender equality and therefore contribute to improve social justice, livelihoods and resilience.

Mountains offer 60-80 percent of the world’s freshwater. According to the UNO, almost one billion people live in mountain areas, and over half of the human population depends on mountains for water and nutrition. Mountains are facing risk from climate change and natural calamities. Mountains face climate change as the global temperature continues to warm which disturbs starving and poorest people of the world who live in the mountains. Due to the increasing temperature, glaciers on the mountains start melting which brings floods in the world. Currently, 329 million people living in the mountains face food scarcity.

Laiba Khan, a participant from Rawalpindi Women University, said young visual artists can play a significant role in educating citizens about the challenges confronting the society. Climate change is the worst phenomenon of this age that could be highlighted through art works to inform and educate people.

Rida Waheed, another participant, said women moving mountains put significance on the women’s contribution in conservation and economic stability of the mountain communities.

FJWU Head of Fine Arts Dr. Mamoona Khan said engaging art students in such creative pursuits is imperative to highlight the impact of climate change as they reflect the mountain miseries. Awareness raising and education about the causes and consequences of climate change is very important for society. Such events support it.

Head of Art and Design at the Westminster Academy Riffat Ara Baig said that they have been engaged with students of different age groups for the last two decades to sensitize them about the environment and conservation of natural resources. The educational institutions shall consistently engage their students and their parents to raise awareness about rational use of resources around us.