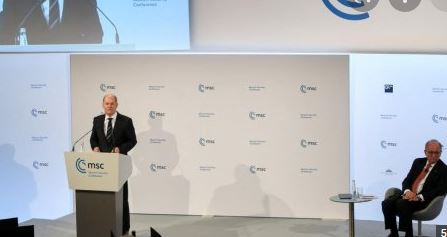 Munich, Germany, /DNA/ – The chances of reviving the Iran nuclear accord are dwindling and the “moment of truth” has arrived for Tehran’s leadership, German Chancellor Olaf Scholz said Saturday.

“We now have the chance to reach an agreement that will allow sanctions to be lifted. But if we do not succeed very quickly, the negotiations risk failing,” Scholz told the Munich Security Conference.

“The Iranian leadership has a choice. Now is the moment of truth.”

The 2015 Iran nuclear agreement had offered Tehran sanctions relief in exchange for curbs on its nuclear programme, but the US unilaterally withdrew in 2018 under then-president Donald Trump and reimposed heavy economic sanctions.

This in turn prompted Iran to start ramping up its nuclear activities.

The outline of a new deal appears to be on the table in talks which have been held in Vienna since late November between signatories Britain, China, France, Germany, Russia — and the United States indirectly.

A US State Department spokesperson told AFP on Thursday that “substantial progress has been made in the last week”.

“If Iran shows seriousness, we can and should reach an understanding on mutual return to full implementation of the JCPOA within days,” the spokesperson said, using an acronym for the 2015 deal.

But “anything much beyond that would put the possibility of return to the deal at grave risk,” the spokesperson added.

Experts believe Iran is only a few weeks away from having enough fissile material to build a nuclear weapon — even if it would take several more complicated steps to create an actual bomb.

President Joe Biden has said he is willing to return to the deal and ease some of the US sanctions, provided Tehran resumes its commitments under the agreement.

The Iranian foreign minister is due to address the Munich Security Conference later on Saturday.