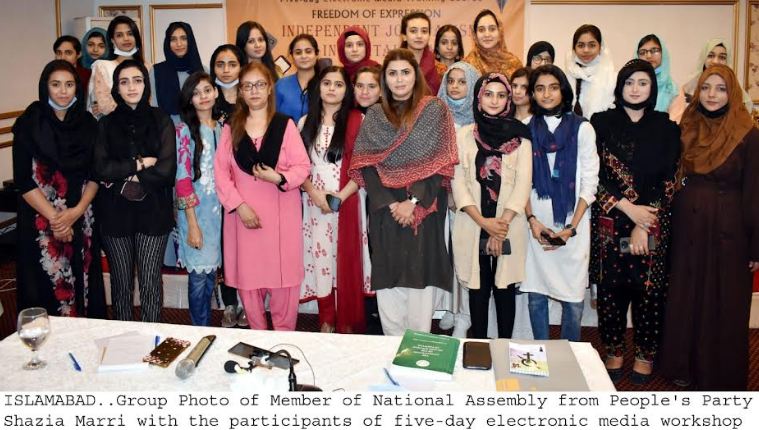 ISLAMABAD, OCT 4: /DNA/ – Politicians and Journalists are closely related, this was said by Member of National Assembly from Pakistan People’s Party and Senior Parliamentarian Shazia Marri while addressing the opening ceremony of five-day electronic media workshop on “Freedom of Expression: Independent Journalism in Digital Era” arranged by Women Media Center, Pakistan in collaboration with National Endowment for Democracy at Islamabad Hotel, Islamabad. Shazia Marri stated that Benazir Bhutto, the martyred chairperson of the Pakistan Peoples Party, was the biggest advocate of media as she always supported freedom of the press.

“Journalists and politicians have made great sacrifices for democracy and freedom.” She also said that the criticism from Media is for our own betterment so that we politicians can do better for the people.The veteran politician asserted that there is a dire need of more women to join media industry as things are not considered from a women’s perspective. Marri also said that in the present times, efforts are being made to suppress freedom of media, adding that, It is in our hands to come forward in this struggle and not to sit down disappointed as more people with vision are needed.

She further said that, study, research and verification is very important for a good journalist chief Executive Officer of Women’s Media Center, Fauzia Shaheen while addressing the participants said that criticism from journalist is a way to solve the ongoing problem. While applauding the friendly approach of PPP towards media, Miss Fauzia stated that PPP is widely known for taking criticism from media in a positive manner.She also urges the participants to read and understand the Constitution of Pakistan for better understanding of their rights.