Kashmiris on both sides of LoC, world over observe Martyrs Day 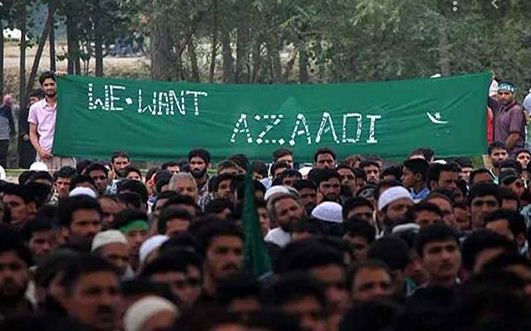 MUZAFFARABAD, JUL 12 (DNA) – Kashmiris on both sides of the Line of Control and world over will observe complete shutdown to mark the Kashmir Martyrs Day tomorrow (Tuesday) to pay homage to martyrs of July 13, 1931.

Call for the strike has been given by the All Parties Hurriyat Conference and supported by all pro-freedom organizations in remembrance of the 1931 martyrs. The APHC has appealed the Kashmiri people to mark the day by a complete shutdown in the IIOJK the territory.

It is pertinent to mention that on 13th July 1931, the troops of Dogra Maharaja had killed 22 Kashmiris, one after the other, outside the Central Jail in Srinagar during the court proceedings against one Abdul Qadeer who had asked the Kashmiri people to defy the Dogra Rule. Thus, 22 youth sacrificed their lives till the completion of Azaan.

A march towards the Martyrs’ Graveyard at Naqashband Sahib in Srinagar will be held where the martyrs of July 13 are buried. The APHC in a statement reiterated its appeal for observance of shutdown to commemorate the martyrdom of 22 Kashmiris who were killed within the premises of Central Jail Srinagar by the forces of Dogra ruler on this day in 1931.

Hurriyat leaders and organisations in their separate statements paid glowing tributes to the July 13 and other martyrs.

The All Parties Hurriet Conference paying rich tributes to the martyrs said that the sacred blood of these martyrs ignited the candle of freedom in Jammu and Kashmir against the tyranny and subjugation of the Dogra rulers.

The freedom loving people of Kashmir observe 13th July as the Martyrs Day every year to commemorate all the martyrs of our freedom moment and take pledge to lead their sacred mission to its logical conclusion, the APHC said. The APHC spokesman reiterated the appeal to the freedom loving people of Kashmir to observe complete shutdown on 13th July and conduct march towards Martyrs Graveyard at Naqshband Sahib, Srinagar and offer Fateh for the martyrs.

APHC senior leader and the President of Anjuman Sharie Shian in his statement issued in Srinagar, paying glowing tributes to the July 1931 martyrs, said that the unprecedented sacrifices rendered by the people of Kashmir for the Kashmir cause would not be allowed go waste and would definitely bring fruit. He said that cancellation of July 13 official holiday by the authorities is tantamount to insult the martyrs’ sacrifices.

Jammu and Kashmir Democratic Freedom Party (JKDFP) said that the shutdown will make it clear to India and its local stooges that despite oppression, we have not forgotten our martyrs and the purpose of their sacrifices. Freedom Party Acting Chairman Mahmood Ahmed Saghar said that Jammu and Kashmir’s struggle for freedom has been going on since the time when the subcontinent was not divided. He appealed to the people of Kashmir to go on a general strike tomorrow, July 13 and reach the Mazar-e-Shuhada to renew their pledge to keep the torch of freedom struggle burning till the dawn of freedom.

In a joint communiqué addressed to the OIC Secretary General and the UN chief Mr. António Guterres, Mehmood Ahmed Saghar said that the blood of innocent Kashmiris was being spilled over with impunity by the trigger-happy Indian forces.

“Innocent civilians in particular the educated youth are being killed ruthlessly by the Indian forces during fake encounters, cordons and search operations that go unabated amidst the fresh tide of corona-virus”, he said adding that the targeted killing of Kashmiri youth amounts to systematic genocide.

Paying tributes to Kashmiri Martyrs, Jammu and Kashmir National Front (JKNF) said that the 13th July was a unique day in Kashmir’s recent history, which provided a solid foundation to Kashmiris’ ongoing struggle against Indian imperialism. Terming this incident as milestone of Kashmiris’ ongoing struggle for right to self-determination, the JKNF spokesman in a statement said that the people of the troubled region have been struggling for their just and legitimate rights guaranteed to them by the international community.

The Jammu and Kashmir Salvation Movement at its meeting in Srinagar, today, paid glowing tributes to July 13, 1931 martyrs and said that the valiant sons of soil resisted tyranny, oppression and suppression of India. They reiterated he Kashmiris resolve to continue the martyrs’ mission till taking it to its logical conclusion.

Jammu and Kashmir Employees Movement (JKEM) spokesman said that the people of Kashmir had been struggling for their fundamental rights since July 13, 1931. He said that the Kashmiris held a peaceful protest outside the Srinagar central jail but the Dogra forces opened fire on them and killed 22 innocent people.

Jammu and Kashmir Muslim League acting Chairman Abdul Ahad Parra addressing a party meeting in Srinagar said that best tribute to the 13 July martyrs is to continue their mission till freedom from Indian clutches. Citing the example of US occupation over Afghanistan, he said that no force can illegally occupy a country or territory by force for long.

Jammu and Kashmir People’s Association (JKPA) Chairman Aquib Wani in a statement issued in Jammu, said, “Kashmiris are sacrificing their lives while fighting against occupation of their homeland that has made life miserable for Kashmiris.” He further said, “The process of disempowering Kashmiri Muslims is still going on under a so called democracy in India like it was under fascist Dogra rule but Kashmiris will remain steadfast in resisting the oppressors.”

APHC-AJK leader Nisar Mirza while paying tributes to July 1931 martyrs said that the massacre of 22 Kashmiris in 1931 to unilateral steps by India in August 2019 is continuation of oppression against the innocent Kashmiri people.