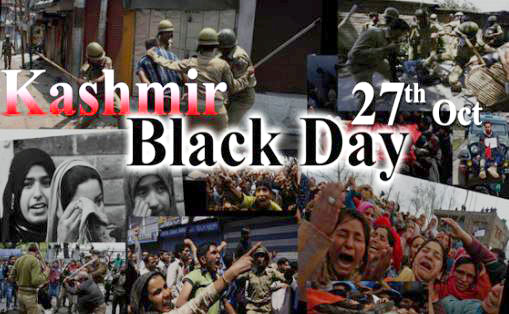 October 27 is observed as a ‘Black Day’ every year. On this day in 1947, Indian forces landed in Srinagar and illegally and forcibly occupied Jammu and Kashmir. Each year, Pakistan observes this ‘Black Day’ along with supporters of the Kashmiri people around the globe — to remember the sacrifices of the brave Kashmiri brothers and sisters, to reject and condemn the inhuman atrocities being committed by the Indian security forces, and to express Pakistan’s steadfast and unwavering support to the fundamental right of the Kashmiri people to self-determination.

For over seven decades, the illegal occupation of Jammu and Kashmir by India continues. India has denied the Kashmiri people their fundamental and inalienable right to choose their own future as promised to them by the international community through the Security Council resolutions. All this while India has used indiscriminate force and a wide range of illegal methods to suppress the brave Kashmiri people. Three generations of Kashmiris have resisted the illegal Indian occupation.

Through massive sacrifices, the message of the Kashmiri people is loud and clear: the Kashmiris do not wish to live under Indian occupation. The occupation of the State by the Indian forces was a violation of the Partition Plan, which required ascertaining the wishes of the people of Kashmir as to whether they wanted to join Pakistan or India. Examined against all the principles that formed the basis of the British plans to partition the subcontinent in 1947, the people of Jammu and Kashmir would surely have become a part of Pakistan as it was a predominantly Muslim majority State — was geographically contiguous to and had close and essential economic and cultural linkages with territories that were to constitute Pakistan. India maliciously claims that it had signed an ‘Instrument of Accession’ with the Maharaja of Kashmir on 26 October 1947 and that the Maharaja had called for India’s military help against the popular uprising of the Kashmiri people — a claim rejected by the people of Kashmir and Pakistan.

There are doubts about the very existence of the Instrument of Accession. The United Nations also does not consider the Indian claim as legally valid, instead considering Jammu and Kashmir as a disputed territory — as does the whole world — except India. In 1947, India and Pakistan went to war over Kashmir. During the war, it was India that first took the Kashmir dispute to the United Nations on 1 January 1948. Several UN Security Council resolutions called for the holding a plebiscite to ascertain the wishes of the Kashmiri people.

The UNSC Resolution 47 (1948) of 21 April 1948, one of the principal UN resolutions on Kashmir stated that ‘both India and Pakistan desire that the question of the accession of Jammu and Kashmir to India or Pakistan should be decided through the democratic method of a free and impartial plebiscite’. Subsequent resolutions of the UN Security Council (UNSC) and UN Commission for India and Pakistan (UNCIP) reinforced the same standpoint. India refuses to comply with the United Nations by holding a free and impartial plebiscite. After several delaying tactics, India reneged from its position and started calling the State an integral part of India. 2 Around three years back, on 5 August 2019, India moved to alter the disputed status of Occupied Jammu and Kashmir and to change its demographic structure by abrogating Articles 370 and 35A of the Indian constitution.

These illegal and unilateral Indian actions have been vehemently rejected by the Kashmiri people, by Pakistan, and by the international community for being in violation of International Law, relevant United Nations Security Council (UNSC) resolutions, and India’s solemn commitments made bilaterally to Pakistan as well as to the people of occupied Jammu & Kashmir. Since then, the security situation has further worsened.

At present, India has stationed 900,000 troops, turning the Indian Illegally Occupied Jammu and Kashmir (IIOJK) into the world’s largest human prison. The Indian forces are engaged in the brutal and indiscriminate use of force, torture, illegal detentions, and custodial deaths. Thousands of innocent men, women, and children have been martyred. The Indian forces are systematically perpetrating such atrocities under draconian laws to rob the Kashmiri people of their distinct cultural and religious identity.

Sabre Rattling by the Indian Defence Minister In an intended insult to the Kashmiri people, Indian Defence Minister Rajnath Singh visited Srinagar on 27th October 2022 to ‘commemorate the arrival of Indian troops in 1947’. In a statement threatening Pakistan, Singh said that Gilgit Baltistan will become a part of India in the not-too-distant future. He added, ‘we have just begun our development journey in Jammu, Kashmir, and Ladakh. This mission will be completed only when we reach the remaining parts such as Gilgit and Baltistan in line with Parliament’s resolution’.

He was referring to a resolution of the Indian Parliament of 1994 that demanded Pakistan ‘vacate’ what India termed as ‘the Pakistan occupied territories of Kashmir’. The Indian Defence Minister also praised the Modi governments’ action to abrogate Article 370 of the Indian constitution according special status to the disputed territory, thus annexing Jammu and Kashmir in 2019. Indeed, the 5 August 2019 annexation of Jammu and Kashmir is an extension of Hindutva-driven policies of the Modi government that espouses the extremist, genocidal Rashtriya Swayamsevak Sangh (RSS) philosophy.

This is an alarming situation for different minorities living in India. India’s hegemonic behaviour and sabre rattling by its leaders is a source of concern for Pakistan as well as other smaller countries of the region. India’s image as a secular and democratic country is tanking. Pakistan’s response Pakistan’s Foreign Office’s responded: • Strongly rejected and condemned the highly irresponsible, provocative remarks made by the Indian defence Minister at a public event on Kashmir Black Day in Indian Illegally Occupied Jammu & Kashmir (IIOJK). • Regarded the Indian Minister’s delusional remarks as farcical and reflective of India’s characteristic hostility towards Pakistan. • Reminded the Government of India that, ‘The ground realities in IIOJK and Azad Jammu & Kashmir (AJK) are diametrically different.

While AJK is free, open, and accessible to the world, India has forcibly occupied IIOJK for the last seventy-five years and manages it as a vast prison.’ 3 • Underlined that ‘since India’s illegal and unilateral actions of 5th August 2019, Indian occupation forces have extra-judicially killed more than 690 innocent Kashmiris. In a flagrant violation of relevant UN Security Council resolutions, international law, and the 4th Geneva Convention, India has been also seeking to change the demographic structure of the occupied territory’.

• Further reminded India that ‘Jammu and Kashmir remains an internationally recognized dispute on the agenda of the United Nations since 1948’. It is an irrefutable fact that India is ‘an occupation force in IIOJK’ in clear violation of the relevant United Nations Security Council resolutions. • Once again called upon the international community to shoulder its responsibility with regards to IIOJK. India must not be allowed to alter the demography of IIOJK and must be held responsible for its brutal repression of innocent Kashmiris. • Stressed that the only resolution of the Jammu and Kashmir dispute lies in ensuring that the Kashmiris are able to exercise their right of self-determination through the democratic method of holding a UN-mandated free and impartial plebiscite as espoused in the relevant UNSC resolutions, and in accordance with the wishes of the Kashmiri people.

Suggested Additional Steps Pakistan must reinvigorate its efforts to further raise the political cost for India for its reprehensible actions in Jammu and Kashmir. Pakistan must focus where it hurts India the most — namely its ‘secular’, ‘democratic’, and so-called ‘tolerant’ image. In addition to the ongoing endeavours to highlight the Indian atrocities and illegal actions in IIOJK, an effective way may be to enhance the use of social media substantially and systematically as an effective tool to show the true face of India to world leaders and opinion makers. Targeted audience, among others, may be: • Those who wield influence in the corridors of power in the US. • Parliamentary members in leading EU countries.

• Major Human Rights Organizations at the United Nations as well as major international NGOs dealing with human rights abuses. • Major global press and media houses Wherever US and EU media targets human rights violations and imposes sanctions e.g., Russian excesses in Ukraine, we should make an effort to juxtapose Indian brutalities in Kashmir. 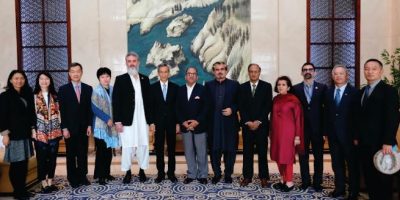 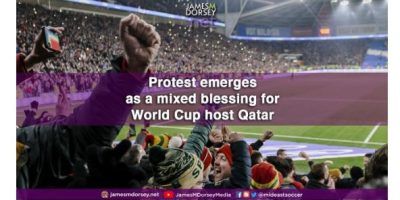