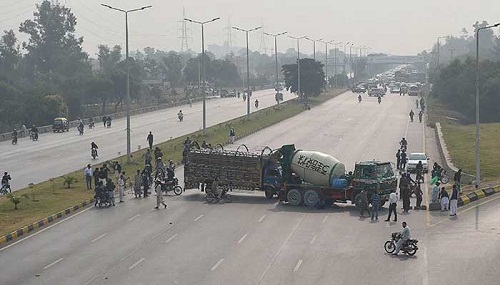 Islamabad : Authorities have suspended the Metro Bus service in Rawalpindi and blocked roads in Islamabad and Lahore as the government braces for protests organised separately by a banned outfit and Opposition parties in the above-mentioned cities.

A day earlier, the Ministry of Interior had written to the Pakistan Telecommunication Authority (PTA) to suspend internet services in various areas of Lahore due to a banned outfit’s protest.

Police have placed containers on the entry and exit points of the city. Lahore’s traffic flow has also been adversely affected after various arteries of the city have been sealed by authorities.

Meanwhile, Islamabad Traffic Police have also issued a traffic plan (read below) as the city braces to deal with protests today.

Stringent security measures have been taken in Rawalpindi, where authorities have suspended the Metro Bus service and blocked its surrounding roads.

Authorities have also blocked several roads in the city’s inner areas. Containers have been placed on the Sixth Road leading to the Faizabad area while the Faizabad Ojri Camp road has also been sealed off.

The city’s administration has said that the Metro Bus will only operate from the IJP Road Stop to the Pakistan Secretariat while it will remain suspended from Saddar to Faizabad.

Multiple ambulances are stuck Murree Road as the road has been sealed by containers. A patient who was to be shifted to PIMS from the Benazir Bhutto Hospital were extremely worried after getting stranded at Murree Road.

His family members said the patient is suffering from kidney and liver ailments.

Even schoolchildren are forced to walk to their schools, with backpacks slung over their shoulders due to the roads being sealed.

The Islamabad administration has beefed up security measures to deal with the banned outfit’s intended long march to the city. The city’s traffic police have called on citizens to use the 9th Avenue and for those who want to traveI to Rawalpindi from Faizabad, to use the IJP Road.

“Faizul Islam Stop, Murree Road have been closed for traffic,” said an ICT spokesperson. “Those who intend to travel from Islamabad to the Murree Road should instead take the Islamabad Highway.”

The Jinnah Avenue road from Express Chowk to D-Chowk has been sealed, said the spokesperson, adding that citizens should use NADRA Chowk and Ayub Chowk to enter and exit the city’s Red Zone area.

Traffic police have instructed citizens to use Park Road, Tiramri Road and Lehtrar Road in the city to reach Islamabad Highway.

Citizen can also use the Srinagar Highway, 9th Avenue and IJP Road to travel to Rawalpindi, said traffic police.