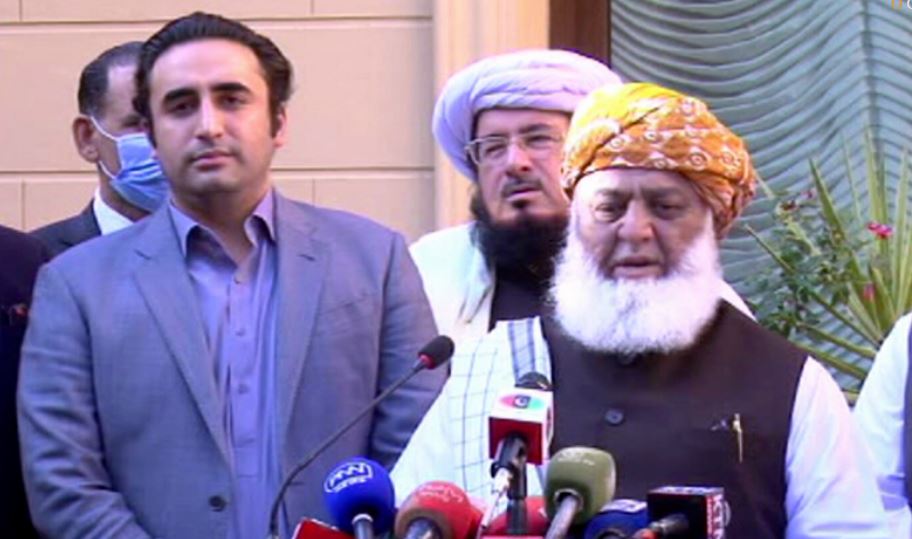 He made the remarks during a meeting with Jamiat Ulema-i-Islam-Fazl (JUI-F) chief Maulana Fazlur Rehman — their first meeting since the PPP quit the opposition alliance Pakistan Democratic Movement (PDM).

The PPP had left the PDM in April in the wake of a show-cause notice being issued to it for nominating PPP leader Yousuf Raza Gilani as the opposition leader in the Senate “in violation of the unanimous decision” of the alliance.

The incident led to a divide in the opposition with both camps flinging criticism at each other. The JUI-F chief had accused the PPP of trying to “stab the opposition movement in its back” in August, while the latter had called on Rehman in September to refrain from “further dividing” the opposition. The PPP chairman visited Rehman’s residence in Islamabad today along with Gilani and senior PPP leader Qamar Zaman Kaira. Bilawal inquired about the JUI-F chief’s health and discussed the country’s political situation with him, according to the PPP. “Joint action in parliament on EVM and accountability laws can lead to more successes. The government’s policies can only be foiled through the parliament,” Bilawal was quoted as saying during the meeting.

He said the recent defeats of the government in the parliament were major achievements for the opposition.

The two leaders also discussed and expressed concern over rising inflation in the country.

Talking to reporters after the meeting, Bilawal said it was another success for the joint opposition that the government had to cancel the joint session of parliament summoned for Thursday and “the prime minister was forced to run away because all political parties in parliament were united and present.”

“We have failed schemes of the NAB (National Accountability Bureau) ordinance, EVMs and undermining the Election Commission of Pakistan till now and the hope is that we will fail every scheme of theirs (government) in the future as well.”

He said he was “very happy” that he could talk with Rehman and discuss various issues with him.

Meanwhile, Rehman said the opposition was playing a united role in the parliament in light of the difficulties being faced by the nation. He said the government had no right to carry out electoral reforms.

“Whatever their suggestions are, we are not ready to accept them at any cost. If it (government) carries out legislation through a false majority then we will liken it to a dictatorial action — this is not the way of the parliament,” Rehman emphasised.

Questioned on the PPP potentially returning to the PDM or supporting a no-confidence motion against the government, both Bilawal and Fazl said those issues had not been discussed in the meeting.

Concluding, Bilawal said: “We all should welcome that the parliament has won. The united opposition has dealt a loss to the government in parliament through democratic means and this has always been our stance that work is done and successes achieved in a democratic manner.”