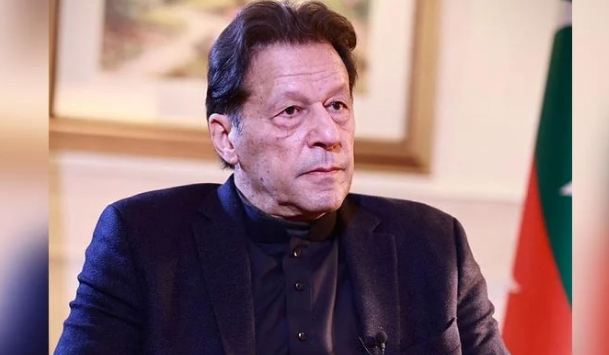 Says govt opts to coercive tactics, detentions to silence dissenting voices
Vows to fight till last breath but won’t accept being subservient to imported regime
Staff Report
LAHORE: Strongly condemning the arrest of PTI Senior Vice President Fawad Chaudhry, Pakistan Tehreek-e-Insaf (PTI) Imran Khan called on the country’s judiciary to protect the party’s fundamental rights, as Pakistan has become a “banana republic” and is operating on a “might is right” formula.
In a televised press conference on Wednesday, Imran Khan vowed that he would fight till the last ball and would not accept being subservient to an imported regime.
However, the PTI Chairman addressed the judges of the apex court that they had been entrusted with upholding rule of law and should play their role to get the country out of the prevailing uncertain situation.
“The kinds of verdicts being given and how the Constitution and laws are being torn apart, there is no future for such a country,” he added. He also questioned what Fawad’s crime was. “It is a crime to call the election commissioner a munshi (clerk)?” he asked.
Imran Khan warned the nation that the country was standing at a crossroads and emphasized that the country cannot continue on its current path.
He stated that the nation must investigate why “we are still devastated” despite having everything, adding that the prevailing injustice was the main cause of the current situation.
PTI Chairman urged the judiciary, judges and legal fraternity to stand for the rule of law in Pakistan. Imran said that he expected the judiciary to “protect our fundamental rights”, as the nation was expecting you to protect our rights.
Condemning Fawad’s arrest, Khan stated that in a democracy, no one should be arrested for expressing their thoughts, adding that the government only wanted to silence voices who speak against it.
He said that Interim Chief Minister Punjab was backing such actions against PTI.
Khan urged his party supporters to stop fearing jails, trials and tribulations and unite against the imported government, which, he said, was hell-bent on taking country towards destruction and chaos.
Khan asserted that the ECP was responsible for holding free and fair elections in the country, reiterating that the commission appointed media Mohsin Naqvi the caretaker chief minister of Punjab without considering his past, who was a key player in the regime change conspiracy against his government.
Imran Khan said that Naqvi reshuffled the Punjab bureaucracy to hold Karachi like polls, where PPP had no vote bank but won the LG elections as it was a part of the grand plan. However, Khan vowed that he would take legal action against Naqvi’s appointment.
About the disintegration of the joint investigation team (JIT) investigating the gun attack in Wazirabad, PTI Chairman said that that JIT members were pressured to drop the investigation because it would have established the conspiracy for assassinating him.
He said that the Punjab interim CM and the PML-N were sabotaging the JIT and questioned why such a move had been made. Hinting that “powerful” forces were out to get him and were involved in his attack, Khan said: “DPO Gujrat Ghazanfar Hussain and SSP Nadeem Hussain, made a video of Naveed, but when the JIT called the two officers and asked for the mobile phone used to make the recording, they flatly refused. I want to know who was behind these two officers?”
Imran Khan went on to say that he could only hope for any justice in the matter if the JIT has been formed under the supervision of the chief justice himself. However, he said: “I have no hope for justice if those who I believed were involved in the attack — Rana Sanaullah and Shehbaz Sharif —are sitting in the federal government.”
Lashing out at the governors of Punjab and Khyber Pakhtunkhwa (KP) for not setting a date for the elections, which he said was a violation of the Constitution.
The former premier also slammed those who wanted the elections to be pushed forward and said “it is written of the Constitution” that elections must be held within 90 days of the dissolution of the assembly. “If there is a Constitution and law in this country, the election cannot go beyond 90 days,” he added.
He further stated that that an institution did not realize that the country’s sovereignty would be compromised if it became economically weak and cited examples of Sri Lanka and Egypt how the government of both countries had to accede to the orders of International Monetary Fund (IMF) regarding armed forces.
He wondered how the institutions could back cabal of crooks after a regime change conspiracy.
Khan urged the nation to take their destiny in their own hands and struggle for a better Pakistan. Imran Khan maintained that such oppressive tactics cannot force him to accept a government led by crooks and thieves and that he will fight such people till his last breath, as he was neither afraid of dying nor going to jail.
Khan said that he has given 26 years of his politics in fight against such politicians loot poor people of Pakistan and stash their wealth abroad so that they can flee the country when needed, because they had no stake in the country.
PTI Chairman made it clear that that such leadership whose interests are abroad cannot take the country towards progress but keeps the country and nation enslaved to their foreign masters.
The PTI chief said that his struggle is for justice and rule of law while the current government wants to bring in the law of the jungle in Pakistan.
PAKISTAN No Comments »