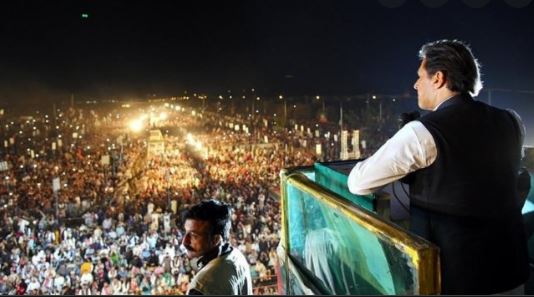 ISLAMABAD, APR 27 (DNA) — Pakistan Tehreek-e-Insaf (PTI) Chairman Imran Khan and former Prime Minister Imran Khan Wednesday once again called upon the nation to get ready for his call to launch a long march towards Islamabad.

Addressing PTI workers’ convention in Lahore, Imran Khan said that his party will observe Ramadan 27 (a possible Shab-e-Qadr) as “Shab-e-Dua” (Night of Prayers) and urged all Pakistanis to join PTI’s Shab-e-Dua for the “real freedom of Pakistan”.

The former prime minister also asked party representatives to launch a public campaign at Union Councils level in their constituencies for preparations regarding the party’s Islamabad march. “I want 2 million people to reach Islamabad on my call,” he added.

Imran Khan said that he will address a rally in Multan on Friday and will gear up his mass contact campaign after Eidul Fitr. While taking aim at PM the PTI chief said: “Shehbaz Sharif is looking for another NRO (National Reconciliation Ordinance) and if he succeeds again in getting NRO 2, Pakistan will never be able to stand on its own feet,” he maintained.

The former PM also questioned the incumbent government regarding the media blackout of his party events. He also lauded ARY News for standing tall. “I ask the media where is freedom of expression when you’re blocking PTI’s coverage now”? he said and reiterated that he would never sacrifice his nation for foreign powers.