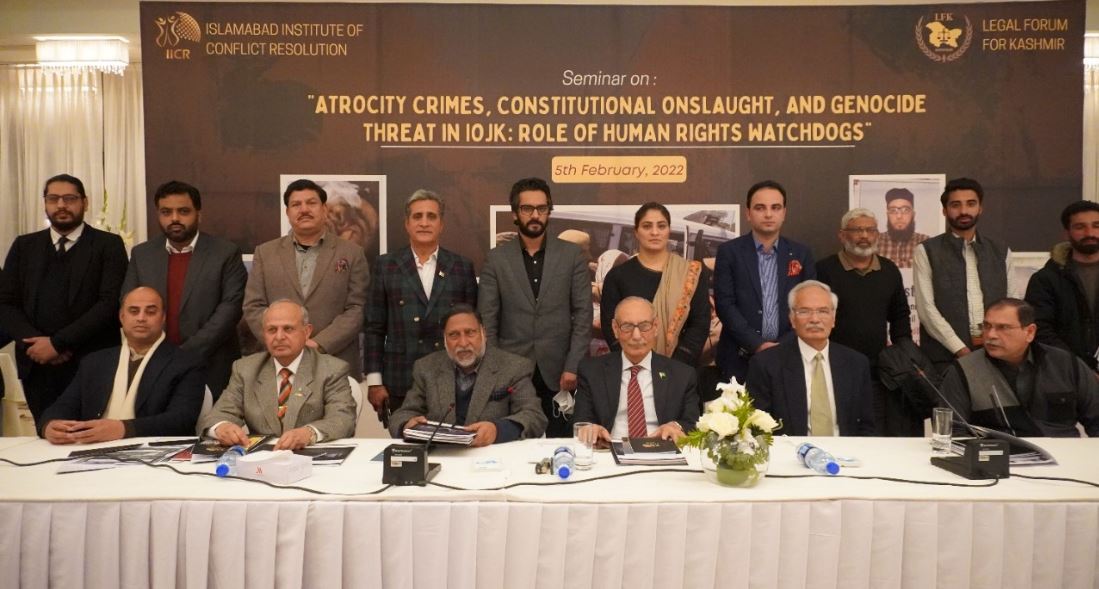 Ms Sabah Aslam, Executive Director IICR, in the opening remarks said, the planned lawfare operation by Modi led BJP government since 2019 posed a serious threat to the civilian population as the unbridled abuse of power by Government of India in IOJk has choked the political space of the dissidents. The legislative and administrative with full pace have already changed the disputed dynamics of IOJK governed under various United Nations Security Council resolutions.

The theme was broadly discussed by the national and international experts on Kashmir and recommended that this is the time for the Government of Pakistan and OIC states to formulate a uniform white paper on the resolution of Kashmir and stop the fascist Indian forces from perpetrating genocide in the Muslim majority region of IOJK.

The experts in one voice alarmed the International community including UN Secretary-General to take immediate measures to stop India from committing mass atrocities in Kashmir.

The speakers further urged that the UN Secretary-General must invoke article 99 of the UN Charter, “The Secretary-General may bring to the attention of the Security Council any matter which in his opinion may threaten the maintenance of international peace and security,” because the occupier is altering the demographic status of the occupied territory and perpetrating war crimes and atrocity crimes against the civilian population.

Meanwhile, the Executive Director Legal Forum for Kashmir (LFK), Nasir Qadrivowed to initiate criminal proceedings against the Indian war criminals involved in the heinous atrocity crimes as in the earlier petition with Stoke White.

To broaden the scope of lawfare and advocacy on Kashmir, LFK and IICR signed a Memorandum of Understanding (MoU). The MoU was undertaken to prepare an exhaustive policy on ICJ’s advisory opinion on Kashmir.

The panellists called for the release of all the Kashmiris languishing in Indian jails, urging for the stop to all the intimidation and coercion of media and human rights activists IOJK by the Indian Occupying Forces and the Indian authorities.

In the end, the experts unanimously condemned India’s atrocity crimes in IOJK and also urged ICRC and other International Humanitarian Organisations to depute a fact-finding mission to IOJK.