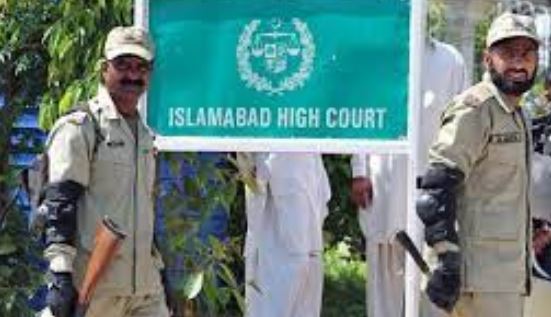 ISLAMABAD, May 02 (DNA): The disrespecting of religion case filed
against the Pakistan Tehreek-e-Insaf (PTI) leadership made the party
members reach out to the Islamabad High Court (IHC).

According to details, the PTI leader Fawad Chaudhary has approached the
court and filed a petition in which he stated that the court should take
action against all the fraudulent cases against PTI.

The IHC on this plea stated that the Interior Secretary should make it
sure that the PTI leadership is not harrassed untill May 9 and uptill
then no further inquiry should also not be done against them, the court
ordered.

The former minister for information and broadcasting further stated that
the court should refrain the illegal harassment of the PTI members and
furthermore the IHC should issue instructions to record the cases
registered across the country.

Any action taken by the police or the Federal Investigation Agency (FIA)
should be considered illegal by the orders of the Islamabad High Court.

The petition is scheduled to be heard by Chief Justice Athar Minallah.

It merits mention here that a case had been registered against PTI
chairman Imran Khan and Awami Muslim League (AML) chief Sheikh Rashid
over the Masjid-e-Nabawi incident.

According to details, Qazi Muhammad Tariq Advocate has registered a case
at New Airport Police Station on the matter of desecration of
Masjid-e-Nabawi by inappropriate behavior and chanting of slogans in the
premises of the Holy place.

As per the lawsuit, a group of miscreants headed by Sheikh Rashid was
sent to Saudi Arabia, adding that the second group from Britain was
headed by Sahibzada Jahangir and included Aneel Musarrat, Nabeel
Musarrat, Rana Abdul Sattar, Amir Ilyas, Ejaz Haq and Gohar Jilani.

The registered case further stated that, the incident that took place in
Masjid-e-Nabawi hurt the feelings of Muslims.

Meanwhile, an application for registration of case against Imran Khan
and Sheikh Rashid has also been submitted at the Margalla police
station.

As per the context of the application, the PTI workers in Saudi Arabia
have violated the sterility of the Holy site, adding that the whole
affair was planned in Pakistan, Sheikh Rashid had pre-planned the
Masjid-e-Nabawi incident.

A case should be registered against the former Interior Minister, it
added.

The petition was filed by a citizen named Muhammad Nawaz Bhatti seeking
registration of the aforementioned case.

Earlier, a FIR has also been lodged against former prime minister Imran
Khan and other top leadership of the party in Faisalabad.

According to the report, the charges are brought for involvement in the
incident at Masjid-e-Nabwi, where Prime Minister Shehbaz Sharif and
federal ministers were ridiculed by some Pakistani pilgrims.

The former Interior Minister Sheikh Rashid Ahmad’s nephew was arrested
by government as soon as his plane landed at New Islamabad International
Airport.

Meanwhile, Federal Interior Minister Rana Sanaullah has hinted that
former prime minister Imran Khan could be arrested in a case relating to
sloganeering against Prime Minister Shehbaz Sharif and his delegation at
Masjid-e-Nabawi.

Rana Sanaullah said that the incident relating to the harassment of
PML-N leaders at the holy mosque was preplanned and about 100-150 people
were involved in the incident.

The minister further said that the Saudi government has decided to take
action against the people involved in the incident, adding that some
people will be deported from the Kingdom. DNA