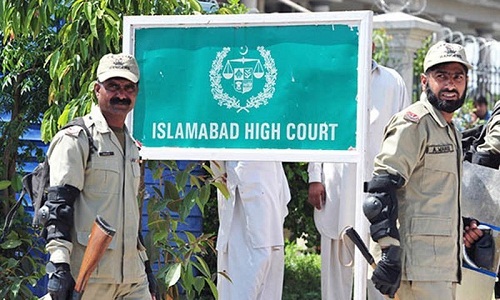 ISLAMABAD : The Islamabad High Court has dismissed the post-arrest bail petition of a senior official working on deputation at the Chinese Desk of the Ministry of Foreign Affairs in a case pertaining to leaking sensitive information to foreign intelligence agencies.

The officer, Syed Qalbe Abbas, a BS-18 official of the Ministry of Planning and Development, had been working as deputy director of the China Division on deputation at the Ministry of Foreign Affairs for nearly three years.

According to an FIR registered against him with the Counter Terrorism Wing (CTW), he frequently met diplomats and officials of foreign intelligence agencies “to deliver secret information/documents prejudicial to the safety and interests of the state”.

The suspect had started his career as a research officer in now devolved ministry of food, agriculture and livestock in early 2000. He later became section officer and was associated with a section in the Economic Affairs Division that deals with the United Nations and foreign training. He became deputy director in the Ministry of Foreign Affairs in September 2018.

Booked under Section 3 and 4 of the Official Secret Act, Abbas is facing charges of leaking sensitive information. According to an official privy to the development, the suspect was part of an organised network working for Russian intelligence and is being probed to ascertain the identity of his accomplices and how he retrieved such information and official documents.

Appearing before the IHC, his counsel, Shah Khawar, argued that the nature of job of his client required him to meet diplomats. He further argued that the petitioner had unblemished service record.

The defence counsel claimed that the FIR was based on fake and frivolous grounds. He said the case needed further inquiry and therefore, the petitioner was entitled to relief of bail. There was no possibility that he might abscond if released on bail, he added.

Talking to Dawn, Mr Khawar said the petitioner had been missing since November 2020 while the FIR was registered against him on Feb 15.

To corroborate his claim, he said, a habeas corpus petition had been filed before the IHC seeking his recovery but to no avail. Finally, he was roped into the FIR and was charged for breach of the Official Secret Act, the counsel said.

During the course of arguments, Additional Attorney General Tariq Mehmood Khokhar on behalf of the federal government said Abbas had been nominated in the FIR with a specific role having been attributed to him.

He argued that petitioner’s statement had been recorded under Section 164 of the Criminal Procedure Code and recovery had been made.

The additional attorney general insisted that the evidence clearly established that the petitioner was working for foreign intelligence officials.

He reminded the court that the offences invoked against the petitioner, if proved, might result in capital punishment or life imprisonment and therefore he was not entitled to relief of bail.

IHC Chief Justice Athar Minallah after hearing the arguments of both sides observed that in addition to the violations of Official Secret Act, Section 409 of the Pakistan Penal Code had also been invoked against him for breach of public trust.

Justice Minallah pointed out that the trial had already commenced, therefore, the defence counsel could take appropriate steps to conclude the trial as soon as possible. The court was of the opinion that the suspect could not be released on bail at this stage and subsequently dismissed his post-arrest bail petition.