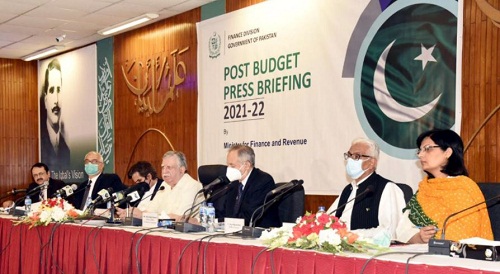 Finance Minister Shaukat Tarin has said the budget 2021-22 focuses on uplift of the poor and sustainable economic growth through incentives for various sectors including agriculture, industry and housing.

Addressing a post budget news conference in Islamabad on Saturday along with Minister for Economic Affairs Khusro Bakhtiyar and Commerce Adviser Razaq Dawood, he said the main emphasis of the budget is to protect the vulnerable segments of the society.

He said four million poor households, to be accessed through the Ehsaas Survey, will be provided with interest free business and farming loans. He said these households will also be given loans to build their own houses. Besides, they will be given health cards and one member of each family will be imparted technical training.

The Finance Minister said incentives have been given to uplift both the agriculture and industries which will increase employability.  He said the incentives in the industries are not only textile specific but have been extended to different sectors. He said taxes have been abolished to facilitate the investment of Chinese friends in the Special Economic Zones being set up under China Pakistan Economic Corridor (CPEC) project.

The Finance Minister said the taxes on the IT have been rationalized in order to exploit its full potential. He said we want to substantially enhance this sector’s exports in the years to come.

Shaukat Tarin said duties have been abolished on almost all the raw materials, which he said, will strengthen the local industries and reduce our imports.

The Finance Minister was confident that the prices of cars up to 850 cc will come down following the tax relief given to the automobiles.  He said the incentives given to the SMEs will also help achieve higher growth in the industry.

The Finance Minister said Prime Minister Imran Khan has given special emphasis to the housing sector which will help strengthen the industries allied with it.

The Finance Minister expressed the confidence that the revenue target of 4.7 trillion rupees set for the current fiscal year will be achieved. He said we have to enhance the tax to GDP ratio to twenty percent in a period of seven to eight years. He said our focus is to bring more people into the tax net instead of imposing more taxes on the people already paying taxes. He said the tax collection target of 5.8 trillion rupees has been set for the next fiscal year, which he said he will achieve through innovative approach including the use of latest technology.

He said the PSDP has been enhanced significantly to take the country towards sustainable growth.

Speaking on the occasion, Khusro Bakhtiyar said the government is incentivizing small and medium enterprises sector, especially automobile industry to increase job opportunities for the youth. He said an industrial zone is being established on 1500 acres of land in Karachi.

Abdul Razzak Dawood said massive relief measures have been taken for import of raw material to strengthen local industry and encourage “Made in Pakistan.”

Addressing the news conference Sania Nishtar said 260 billion rupees have been earmarked in the next budget for Ehsaas Programme.

She said six-month instalment of 12,000 rupees is being enhanced to 13,000 rupees under Ehsaas Kafalat Programme. She said Ehsaas Emergency Cash Programme next phase will commence from the upcoming week, which will benefit over ten million people.

Sania Nishtar said scope of Ehsaas Waseela-e-Taleem Programme has been increased from primary to secondary and higher secondary level, and now children studying in these levels can also benefit from this initiative. She said 65,000 scholarships for under-graduates will be given during the next year.

Responding to a question, the Finance Minister said the federal cabinet did not approve the proposal to enhance charges of SMS, mobile phone calls and interest.

Answering another question, he hoped that inflation will remain below eight percent in the coming years. He also ruled out chances of bringing any mini-budget.

« IHC dismisses bail plea of suspected spy (Previous News)
(Next News) No plans to handover airbases to US: FM Qureshi »