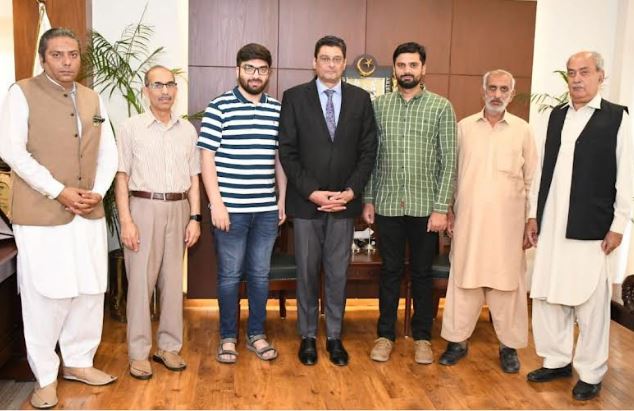 Islamabad, APR 9 /DNA/ – Muhammad Shakeel Munir, President, Islamabad Chamber of Commerce & Industry (ICCI) has slammed the decision of the State Bank of Pakistan (SBP) to make a steep hike of 2.5% in benchmark interest rate taking it to 12.25 percent and termed it a harsh measure as it would badly affect the growth of business activities and hurt exports. He said that the policy interest rate was 4% in India, 4.75% in Bangladesh, 3.7% in China, 0.5% in Thailand and 0.75% in Hong Kong, but it has been increased to 12.25% in Pakistan, which was almost the highest in the region. He warned that this massive hike in the policy interest rate would adversely affect all sectors of the economy and lead to further downfall in the trade and industrial activities. He urged that the SBP should immediately revisit and withdraw this irrational increase as it would prove disastrous for the economy. He said this while talking to a delegation of Fruits & Vegetables Market, Islamabad during their visit to ICCI. Muhammad Naveed Malik and Khalid Chaudhry former Senior Vice Presidents, Muhammad Hussain Vice Presidents ICCI were also present at the occasion.

ICCI President said that our economy was already facing many great challenges including rising inflation, sharp currency devaluation, unbearable foreign debt, depleting foreign exchange reserves, growing fiscal imbalances and dwindling foreign direct investments. He said that in these circumstances, the government should have made significant cut in the benchmark interest rate to promote ease of doing business in order to revive the business and economic activities. However, the great hike in interest rate would make the credit cost unviable for the private sector due to which efforts to expand current businesses and make new investments would face massive hurdles. He emphasized that the SBP should reconsider its decision and reduce the interest rate to make credit cost affordable for business class.

Jamshaid Akhtar Sheikh Senior Vice President and Muhammad Faheem Khan Vice President ICCI said that in the past, governments used the policy of increasing interest rate to control inflation, but this policy has failed miserably. They said that instead of controlling inflation, high interest rate would lead to rapid de-industrialization causing more slowdown in GDP growth. They urged that SBP should withdraw the massive hike in interest rate to save the economy from its disastrous consequences.