Himalayan rock salt from Pakistan makes it big in China 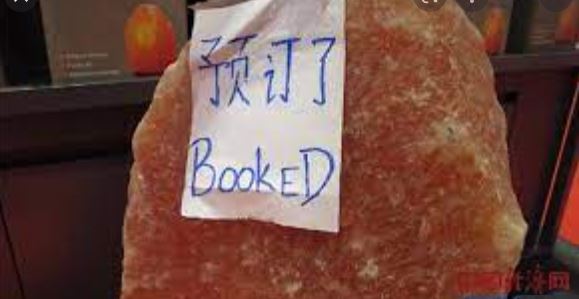 BEIJING, Nov 12 /DNA/ – Salt lamps, bath salt, pink salt…Himalayan rock salt from Pakistan is making a splash in the Chinese market. “You see, I have sold four batches in such a few days. On November 6th alone, more than 50 salt lamps were sold to customers”, Mian Muhammad Zubair in charge of the Pak Persian salt lake booth said while talking to China Economic Net (CEN) excitedly in fluent Chinese on the fourth China International Import Expo (CIIE).
It has been the second time that CEN journalists paid a visit to the booth. Unlike last time, many salt lamps on the shelves have been labeled as “booked”, even the costly large one on the ground has been reserved for some generous clients. The salt for these lamps is exploited from Khewra Salt Mine, Punjab, which is also the world’s leading producer of Himalayan pink salt.
As the second largest salt deposit in the world, the Khewra mine is estimated to have more than 1 billion tons of salt in store. Since mining started in 1838, more than 350,000 tons of rock salt with a purity of 98% have been produced annually.
After being made into a wide range of products such as edible pink salt, salt lamps, bath salts, salt bricks, etc, they are exported to China, Britain, the United States and many other countries, making a name all over the world.

“There are pink, black, and white salt in Pakistan. Black salt lamps are rare, but pink ones are more popular in China”, said Zubair. According to him, this is the first time for black salt lamps to appear at CIIE. The Himalayan salt lamp is a chased-after product in the world’s second largest consumer market. Within five minutes of the journalists’ stopover at the Pak Persian booth, at least three Chinese buyers inquired and bought the salt lamps.
“We plan to place it in the living room. Later we might transform one of the rooms into a salt room. We can also use the salt for bath”, said a Chinese buyer in the massive health industry.
On a major Chinese e-commerce platform, made-in-Pakistan Himalayan salt lamps are part of China’s Double Eleven (Nov. 11) annual shopping festival. In the comments section, many Chinese consumers give the salt lamps a thumb up.
The flocking Chinese buyers reflect the enthusiasm of Chinese consumers for salt lamps. On a major e-commerce platform in China, over 600 commodities are displayed under the category “Himalayan salt lamp”.

The top-ranking stores are witnessing thousands of transactions as well as comments per month. In this niche market, salt lamps weighing 4-5 kilometers at RMB 118 (about PKR. 3,145) are the best-sellers. The price of those with a weight of over 100 kilograms is as high as RMB 13,000 (about PKR. 350,000). Apart from salt lamps, pink salt is even more popular in the Chinese market.
“Himalayan pink salt with Pakistan as its main country of origin is our feature product for CIIE this year”, revealed Zhou Wenqi, project director of Zhongbai Investment Group Co. Ltd.
Pakistani pink salt distinguishes itself with the marble-like appearance and color, as well as the processing and production technology. In addition, people’s admiration towards the Himalayas adds to their appeal.
“We have decades of experience in selling salt. We started selling Chinese domestic salt and then imported Australian sea salt. With the increase of sea salt products in the Chinese market, mineral salt and deep mountain salt are becoming more and more accepted in China, especially in the coastal areas,” said Zhou.
“Iodine is commonly added to salt in China. People in coastal areas have a higher intake of iodine, and eating iodized salt is likely to cause hyperthyroidism among them, so they need to eat iodine-free salt,” a professional buyer from Tianjin told CEN reporter that he started eating Himalayan pink salt in 2016.

A search for “pink salt” on China’s major e-commerce platform yielded more than 160,000 items. The best-selling Himalayan pink salt has more than 20,000 customer comments. A bottle of pink salt weighs 1.5 kg and costs RMB 79, or about 2,105 Pakistani rupees,  which is about seven times the price of ordinary edible salt in China.In addition to pink salt, Chinese exhibitors also took the initiative to introduce Pakistani pink salt mixed products.
At the CIIE, the reporter first saw mixed condiments with pink salt and black pepper, pink salt and rosemary, pink salt and chili, as well as black salt. It is worth noting that in the Chinese market, the “Certification of Origin of Pakistan” is becoming the authentic identity mark of Himalayan pink salt. To curb the unauthorized sale of Pakistani products by other countries, Pakistan announced this year that pink salt was registered as a product with geographical indication.
Pakistan also enacted the “Geographical Indications Act 2020” to protect its local products, combat counterfeit products and ensure prices in foreign markets.
Himalayan salt was once imported in large quantities by countries such as India, then processed into pink salt and sold all over the world. Direct cooperation between Chinese and Pakistani trading companies can not only bring higher prices to Pakistani pink salt, but also allow Chinese consumers to obtain products at good prices.
The buyer from Tianjin said that he initially bought pink salt from Canada, which was also produced in Pakistan. “If we can contact Pakistani suppliers through the CIIE, we don’t have to purchase from the United States or Canada, and the price will fall.”
In general, the sales of Himalayan rock salt products in the Chinese market are accelerating.
According to the Annotations on Domestic Sub-categories of the Customs Import and Export Tariff of the People’s Republic of China, Himalayan rock salt falls under category 25010019, the applicable most-favored-nation tax rate and general tariff rate are both 0%, and its value-added tax rate is 13%.
Chinese customs data show that the total amount of other salts (HS CODE: 25010019) imported by China from Pakistan increased by 29% in 2020 compared with 2019.
From January to September 2021, China’s import growth rate further accelerated, with a year-on-year increase of more than 60%, which also confirms the growth rate of China’s import of Himalayan salt products from Pakistan. “China will firmly share market opportunities with the rest of the world. Our annual import in goods and services is valued at around USD 2.5 trillion. All this offers an enormous market. Going forward, China will lay more emphasis on expanding import, and pursue balanced development of trade,” Chinese President Xi Jinping made the remarks while addressing the opening ceremony of the 4th CIIE via video.
Xi’s speech has also demonstrated China’s resolve to increase imports from neighboring countries and promote Silk Road e-commerce.
Pakistani ambassador to China Moin ul Haque believes that Pakistan’s exports to China will double in the next three to five years. While Chinese and Pakistani traders are confident about the market prospects of Pakistan’s Himalayan rock salt in China.
In Zhou’s eyes, after trying to import small quantities of goods through CIIE, the channel has been opened. “On November 6, we signed several agents.
Five large enterprises proposed to cooperate with us in the morning. In the future, we will import pink salt on a large scale and import more products based on the channel,” Zhou said.
“After nearly five years of exploration, we found that the Chinese market has very positive feedback about salt lamp. We currently have five physical stores in Shanghai and are running a business via WeChat. We also plan to open a store on Taobao.com by the end of this year,” Zubair said.
With the fast growing of Himalayan rock salt products suppliers in China, those suppliers like Zubair have got to move their feet quicker.