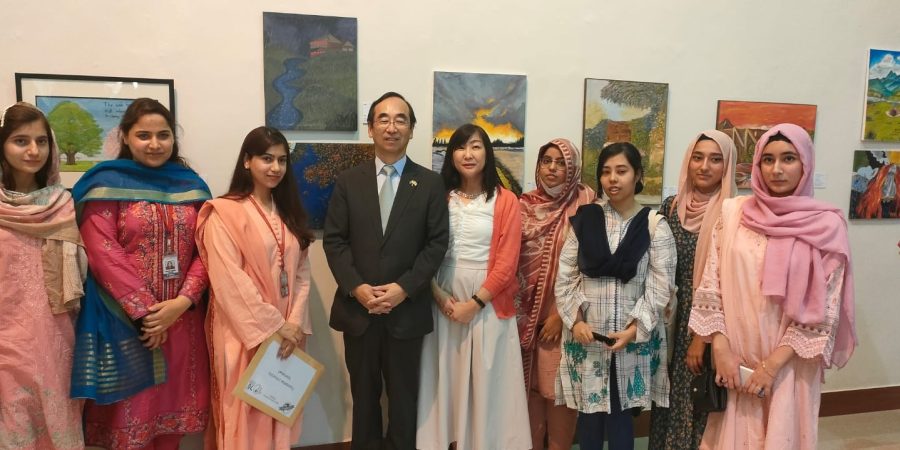 ISLAMABAD:  To promote creativity and cultural affinity about the traditional Japanese poetic form of Haiku among the youth of Pakistan,  the Embassy of Japan and Pakistan-Japan Cultural Association (PJCA) Islamabad in collaboration with Pakistan National Council of the Arts (PNCA) organized a first ever “Haiku Poetry Art Illustrations Exhibition” at the National Art Gallery on Thursday 22nd September 2022 .

The exhibition that features 110 art works themed on the Haikus painted by the students from educational institutions in the twin cities including some art organizations have been put on display depicting their creative talent as well as their understanding of haiku. The exhibition was curated by Mr. Jamal Shah, an eminent artist and executive member of Pakistan-Japan Cultural Association Islamabad.

Haiku is a precise, compact and condensed form of traditional Japanese poetry written in 5-7-5 syllabic form usually in three lines that dates back to the 17th century and

still remains popular in modern Japan, and is now practiced in many countries of the world including Pakistan.

H.E. Ambassador WADA appreciated the students and other artists participating in the exhibition for their eye-catching thematic art works reflecting their keen interest and understanding of haiku poetry and Japanese culture. The Ambassador stated that the purpose of showcasing this exhibition was to encourage the students in exploring and doing research on haiku poetry and also to show their artistic skills.  “Understanding art and culture of another country is the best way to get familiar with its people and society as it promotes enhanced people-to-people contacts hailing from varying cultures” said the Ambassador.

The Ambassador expressed his gratitude to PJCA, PNCA, students and teachers for their collaboration in organizing this wonderful exhibition.

The exhibition will remain open for public till September 29, 2022.

One minute silence was observed for victims of floods in Pakistan and typhoon in Japan. Ambassador expressed condolences to flood victims in Pakistan and assured Japan’s continued support for the people of Pakistan.