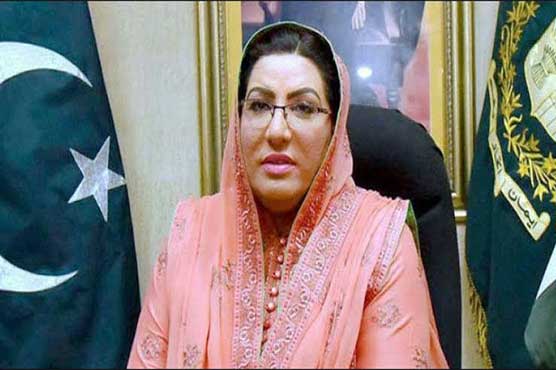 ISLAMABAD JAN 25 (DNA) : Special Assistant to the Prime Minister on Information and Broadcasting Dr. Firdous Ashiq Awan on Saturday called for a review of the economic situation of the country following the death of a private TV reporter who was not paid for months.

A private TV channel cameraman, Fayyaz Ali, who sadly passed away on Tuesday night after suffering a cardiac arrest, was terminated from his job with unreleased salary of several months. Pakistani media is encountering stark financial crisis for a while now.

Firdous Ashiq Awan expressed that the incumbent government is totally aware of the media workers and announced Rs1 million as compensation to the bereaved family. She also announced to give Fayyaz’s brother a job in the Ministry of Information along with a house for his family in the housing scheme.

“We shall talk to the media moguls and journalists’ bodies about the salary issue of journalists,” she said, adding that the government understand the pain the journalists are going through. She added that effective measures are being taken for the rights of a media person. She also expressed heartfelt sympathy towards cameraman’s family.

On the other hand, Dr. Firdous Ashiq Awan expressed sorrow over the loss of dozens of people in Turkey due to earthquake, saying that Pakistan is standing beside Turkey in this time of difficulty.

“Turkey is our friend,” said Firdous Ashiq Awan while talking to media today in Islamabad. Firdous said that she talked to Turkish ambassador who apprised her about over 1,000 people who got injured due to earthquake in eastern part of Turkey.

« India, Pakistan should work together for people’s welfare: envoy (Previous News)
(Next News) Pakistan faces headwinds in its path to recovery: Report »