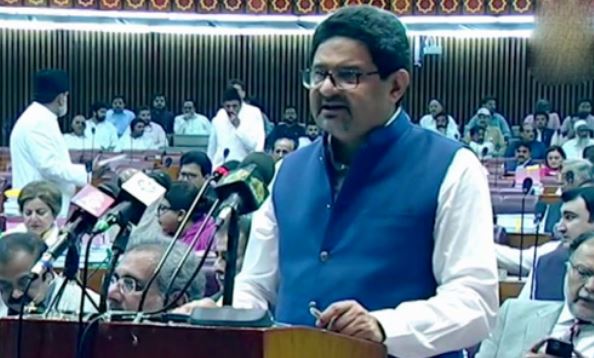 ISLAMABAD, JUN 10: The government has targeted GDP growth of 5 per cent for next year. Finance Minister Miftah Ismail is presenting the budget for fiscal year 2022-23 (FY23) in the National Assembly.

This year the budget session is less chaotic than the last few presentations during the PTI-led government as there is no opposition present in the House since PTI members have tendered their resignations.

Ismail began his speech by bashing the previous PTI government, saying its policies had hurt the economy and damaged the lives of the country’s masses.

“An inexperienced team brought the country to the brink. Different people presented the budget every year presenting different policies which hurt investor sentiment,” the finance minister said, adding that his government had begun repairing the economy by taking the tough decisions that were the need of the hour.

The government has budgeted total current expenditure at Rs8,694 billion for FY23, which is 15.5 per cent higher than last year’s budgeted figure.

Defence expenditure is budgeted at Rs1,523 billion, which makes up 17.5 per cent of total current expenditure and is 11.16 per cent higher than last year.

Interest payments, or debt servicing, budgeted for FY23 have risen a whopping 29.1 percent from last year to Rs3,950 billion — making up the single largest expenditure of the government, which accounts for 45.4 per cent of total current expenditure.

The finance minister said the fiscal deficit will be brought down to 4.9 per cent of the GDP for FY23.

“The problem of our economy is that growth is 3-4pc, but when it moves up to 5-6pc, our current account deficit goes out of control, because we give priority to the elite, which increases our imports. We need to adopt new thinking, to facilitate the lower-income section to increase domestic production,” the minister said.

He said the government had to move towards “sustainable growth”, adding that the growth target for next year was set at 5 per cent.

“The government is aware that the common man is struggling with high prices and we are doing are best to bring them down,” Ismail said, adding that the government had set a target for 11.5 per cent inflation next year.

The government has imposed a capital gains tax on immovable property held for up to 1 year at 15 per cent, which will reduce by 2.5 per cent every year to 0 per cent after six years.

Advance tax on sale and purchase of property for non-filers has been kept at 5 per cent while it is 2 per cent for filers.