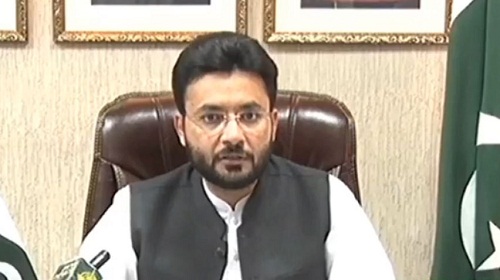 ISLAMABAD, Sep 30 : Minister of State for Information and Broadcasting Farrukh Habib on Thursday urged the international community to engage with the Afghan people to avert the looming humanitarian crisis in Afghanistan.

Addressing a round table conference on Afghanistan’s reconstruction organized by Global Peace Chain here,  he said that Pakistan has been supporting Afghan people and would continue to support them.

He said peaceful Afghanistan was vital for peaceful Pakistan as unrest in neighboring countries ultimately affects neighbors. He said that Pakistan was the only country in the world that was hosting more than 4 million Afghan refugees.

He said as a neighboring country, Afghans look to Pakistan in every difficulty, including trade and medical treatment.

He said that Pakistan sacrificed over  80,000 lives in the war on terror and suffered over  $  billion  economic losses, and the world must acknowledge this fact.

He said that Pakistan Armed Forces and security agencies  broke the networks of terrorists, and busted terror financing nexus.

Farrukh Habib said that even before becoming the Prime Minister, Imran Khan was clear about the solution to the Afghan problem.

He said that the Prime Minister always insisted on a political solution to the Afghan problem and  holding a comprehensive dialogue.

After the establishment of Taliban political offices in Qatar, all stakeholders had the opportunity to meet and positive progress was made in the affairs.

According to a United Nations report, 9 million Afghans were living below the poverty line and  the world needed to pay attention to this.

He remarked that if the world leaves Afghanistan alone in this difficult time, it will have negative consequences.

He said that the route to Central Asia passes through Afghanistan, so its stability was imperative for  economic growth and stability of the entire region.

The minister said that Afghanistan’s soil should not be used against any country and fundamental  rights of all should be protected by the current political system of Afghanistan.He said that Pakistan  played its role in evacuation of foreigners from Afghanistan and helped in provision of humanitarian aid to Afghanistan.

Farrukh Habib said that the world should know that Pakistan was a responsible and peace loving country.

He said that the Taliban government in Afghanistan was a reality  and the world should accept this reality with open heart.

He said that Pakistan has been trying for installation of a consensus government having representation of all stakeholders in Afghanistan.

He said that now Pakistan has a very clear stance that it  would be a partner in peace not war and it  will continue to work for peace in Afghanistan.

He said in his recent  address to the United Nations General Assembly, PM Imran Khan emphasized that the world should help the Afghan people.