EU must play role for stability in Afghanistan: Fawad 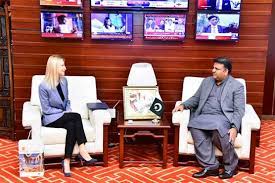 ISLAMABAD , NOV 11 :  Minister for Information and Broadcasting, Chaudhry Fawad Hussain said on Thursday that world including European Union must play their due role to ensure stability in Afghanistan.

Talking to Bulgarian Ambassador to Pakistan, Irena Gancheva in Islamabad on Thursday, Information minister said Pakistan had been conveying its concerns to the world about Afghanistan as prevailing situation in Afghanistan is not less than any tragedy.

Terming a recent report on Afghanistan by an international journal The Economist ‘worrisome,’ he said some twenty-three million people, out of thirty-eight million, in Afghanistan suffered from malnutrition and children died out of hunger in the war-ravaged country.

He said Pakistan would not recognize the current government of Afghanistan until the regional powers acknowledged it.

The minister said Pakistan and Bulgaria had been enjoying decades-long diplomatic and brotherly ties, adding Pakistan always kept its ties with Bulgaria in highest esteem.

The Bulgarian envoy appreciated Pakistan’s efforts for safe evacuation of foreign nationals and diplomats from Afghanistan.