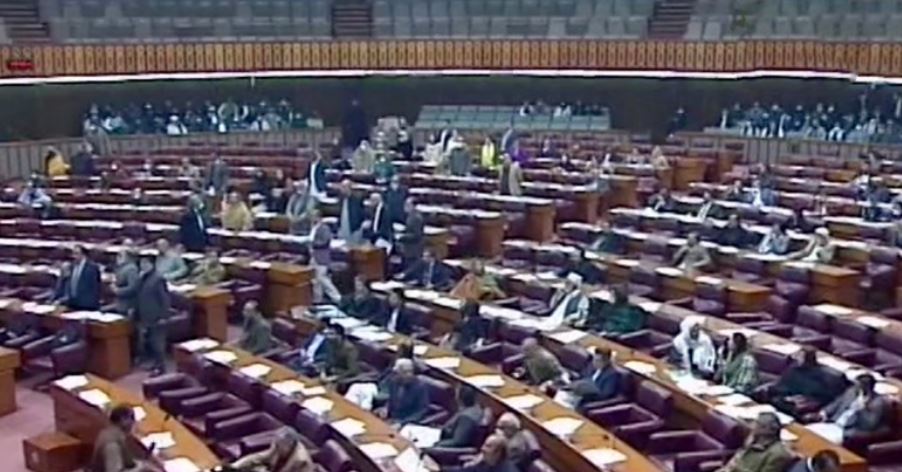 ISLAMABAD: Finance Minister Shaukat Tarin on Thursday presented the Finance (Supplementary) Bill 2021 — or the mini-budget as the opposition calls it — in the National Assembly (NA) amid uproar from the opposition benches.

The bill was originally scheduled to be presented in parliament on Wednesday but the cabinet had deferred its approval due to desiring a “threadbare discussion” on it.

The bill’s approval is necessary to ensure Pakistan’s sixth review of the $6 billion Extended Fund Facility gets cleared by the International Monetary Fund’s executive board on January 12, paving the way for the disbursement of about $1bn tranche.

Speaker Asad Qaisar said the bill will not be forwarded to the standing committee concerned. The House also adopted the resolution seeking extension in The Election (Third Amendment) Ordinance for 120 days.

Speaking on the occasion, PML-N leader Khawaja Asif said the government had violated the Constitution by presenting an ordinance that had already lapsed and expired.

“You’re giving SBP’s control to IMF. Please have mercy on the people of Pakistan. Don’t sell Pakistan. You allowed people to loot the country for three years,” he said, making a reference to the State Bank of Pakistan (SBP) Amendment Bill 2021 — another legislation needed to ensure the disbursement of $1bn tranche by the IMF.

He urged the House to not let Pakistan surrender its sovereignty.

“Surrendering Pakistan’s economic sovereignty is more dangerous than that of the surrender in 1971,” he said while referring to the East Pakistan debacle.

He said the whole nation was ashamed of what was happening in the parliament.

Adviser to the Prime Minister on Parliamentary Affairs Dr Babar Awan responded that the assembly proceedings were being carried out under the prescribed rules and procedures.

The speaker also ruled that the resolution for extension in the election amendment ordinance was legitimate.

In response to Asif’s speech, Planning and Development Minister Asad Umar said the opposition had been trying to “scare the nation” by making a hue and cry over the SBP amendment bill.

“The difference between them and us is that when they work to curb dengue, they have to advertise about it themselves. But when we work to curb Covid-19,” international forums praise the Pakistan Tehreek-i-Insaf-led government, Umar added.

He also lambasted the opposition for criticising the government over national security.

When it was his turn to speak, PPP leader Raja Pervaiz Ashraf said in the last NA session, which was chaired by Deputy Speaker Qasim Suri, he had told the chair that there were reports of the government presenting a “mini-budget” in the assembly.

“I had said that it will make life more difficult for the people of Pakistan, but the chair had dismissed my concerns,” Ashraf said. “When, in fact, that was the time for the opposition to speak on the matter.”

He further complained that when the bill was presented today, even then the opposition was not being heard.

The PPP leader also said that in his response to Asif, Umar had not addressed any of the questions and issues raised by the PML-N leader.

“He (Umar) failed to satisfy this House,” Ashraf added.

He urged the speaker to reject today’s (Thursday’s) proceedings so that opposition and treasury members could present arguments on the matters taken up in the session anew.

Adviser to the Prime Minister on Parliamentary Affairs Dr Babar Awan responded that the assembly proceedings were being carried out under the prescribed rules and procedures.

The speaker also ruled that the resolution for extension in the election amendment ordinance was legitimate.

The State Bank of Pakistan (SBP) Amendment Bill 2021 was also presented in the House, which was referred to the relevant standing committee for necessary vetting.

Foreign Minister Shah Mehmood Qureshi said the opposition had the right to present its point of view, however, “the government’s job is to put forth facts before people”.

As Qureshi continued to speak, the opposition members pointed towards an incomplete quorum in the House. Responding to the opposition’s objection, the speaker adjourned the session till Dec 31.

Earlier in the day, a meeting of the parliamentary groups of parties included in the ruling alliance led by the PTI on the issue of the bill’s passage was also held.