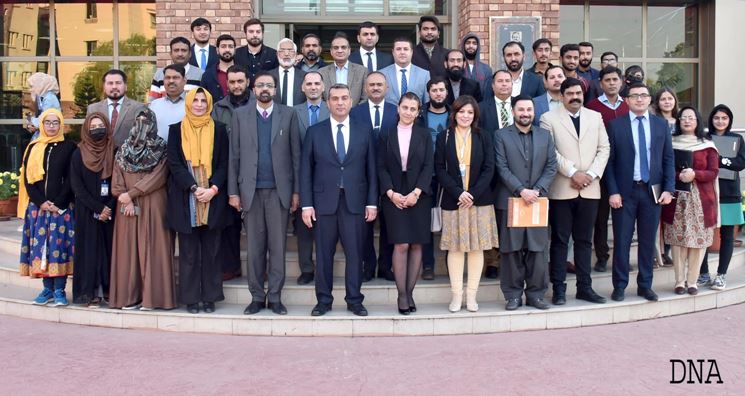 ISLAMABAD: Ambassador of Azerbaijan Khazar Farhadov has said National leader Heydar Aliyev has an undeniable contribution to the formation of our youth as an individual, a true citizen of Azerbaijan. Youth policy has always occupied a special place in the rich and magnificent state activity of the Great Leader. Back in the 70s and 80s of the last century, on the instructions of a wise leader, hundreds of young Azerbaijanis were sent to the leading universities of the former USSR, including Moscow, to study in various specialties. Suffice it to mention the fact that in 1970, on the initiative of Heydar Aliyev, more than 1,500 young Azerbaijanis were covered by this care.

Ambassador of Azerbaijan expressed these views while speaking at  seminar held at the COMSTAS Univeristy.

He furhter siad, In 1970-1985, the number of Azerbaijani youth studying in 170 well-known higher education institutions of the Soviet Union reached 3,500. It was these young people who later began to work in our country as skilled personnel in various sectors of the economy as highly educated specialists. Every year, 800 students were sent abroad to study. Young people studied in St. Petersburg, Kiev, Kharkov and Minsk. They had to solve the problems of the new era, which would include the Republic of Azerbaijan.

He added, in 1995, the National Council of Youth Organizations was established. In order to increase the role of Azerbaijani youth in the development of society and the solution of many important problems, to increase their participation and responsibility in the future development of the country, national leader Heydar Aliyev initiated the Azerbaijani Youth Forum in 1995. Thus, on February 2, 1996, the First Youth Forum was held. The first Forum played an important role in defining youth policy in Azerbaijan. By the way, World Youth Day was declared only in 1999 by the UN. On February 1, 1997, on the occasion of the anniversary of the forum, great leader Heydar Aliyev received a group of young people and signed an order declaring February 2 – Azerbaijan Youth Day.

Noting that the achievements of Azerbaijani youth in the field of sports in recent years are particularly noteworthy, President Ilham Aliyev rightly stressed that physical education and health of young people is one of the main priorities. Azerbaijani athletes worthily represent our country in international competitions, Olympics, world and European championships.

As a result of the policy pursued and the work done, we can say with full confidence that today the youth of Azerbaijan has gained an enviable reputation among the world’s youth with its intellectual, creative and spiritual-ideological maturity.

While talking about Quaid’s message for directionless youth the ambassador said ‘Mairy Nojawano’ or ‘’Pakistan kay Jawano’’ phrases of calling out youth and addressing them has its deep roots in Pakistan movement and its political history. During Pakistan Movement, major contribution of different student federations cannot be overlooked. Young students of different provinces played their vital role in spreading the message of an independent land with their demonstrated faith, unity, discipline, determination, sacrifice and relentless work.

Quaid-i-Azam Mohammad Ali Jinnah had high hopes from Pakistani youth and in all his important addresses to students, he stressed upon youth’s vision in life. Quaid also believed in training the youth through educational reforms. In order to show relevancy of Quaid’s vision to education system we need to view his message to the first Education Conference in November 1947, when he said: “the future of our state will and must accordingly depend upon the type of education we give to our children, and the way in which we bring them up as future citizens of Pakistan”.