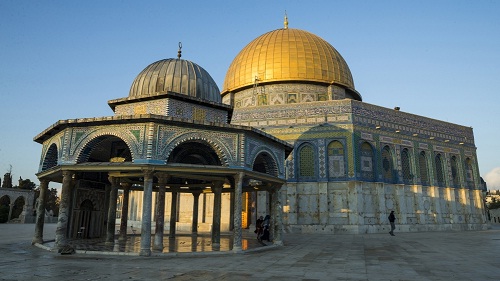 RAMALLAH: The state of Palestine- Ministry of Foreign Affairs and Expatriates // Palestinian-Jordanian coordination to confront the decision of the occupation court to allow Jews to pray in Al-Aqsa

The state of Palestine-Ministry of Foreign Affairs and Emigrants have condemned in the strongest terms the unprecedented decision taken by the so-called Jerusalem District Court regarding the right of Jews to perform silent prayers in the courtyards of the blessed Al-Aqsa Mosque, “The presence of Jewish worshipers on the Temple Mount does not constitute a criminal act as long as their prayers remain silent,” as the court decided  Cancellation of deportation decisions against rabbis who performed such prayers.  The ministry considers this decision a flagrant aggression against the blessed Al-Aqsa Mosque, a real declaration of war against the Palestinian people and the Arab and Islamic nations, a real beginning of the spatial division of the mosque and its courtyards, and an explicit call for religious war in the region.  The decision of the Israeli court revealed the true nature of the incursions and the scheme behind them, which we have always warned of repeatedly, and it is another evidence that the system of courts and justice in Israel is an integral part of the occupation system itself.

The Ministry views this decision, its consequences and serious repercussions on the blessed Al-Aqsa Mosque and its existing historical and legal situation with great gravity.  The Palestinian ministry and diplomacy consider themselves in a state of alert to confront this decision and its dangers, and it will continue its political and diplomatic action at all levels to bring it down, including the United Nations and its competent organizations, foremost of which is the Security Council and UNESCO, and the ministry will coordinate its efforts and actions with the brothers in the Hashemite Kingdom of Jordan and with the Arab League.  And the Organization of Islamic Cooperation and friendly countries at the regional and global levels.  The Ministry calls on the Arab and Islamic worlds to deal with the utmost seriousness with this decision and its dangers to the blessed Al-Aqsa Mosque.