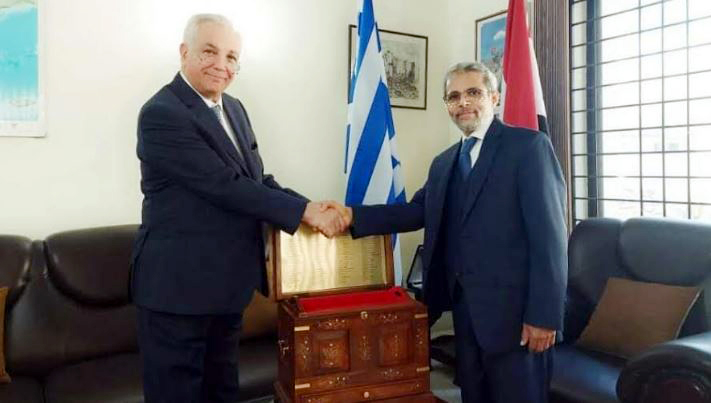 ISLAMABAD: /DNA/ – Ambassador Mohammed Alashabi, Acting Dean of Diplomatic Corps,hosted a farewell reception for the outgoing Ambassador of Andreas Papastavrou who is leaving Pakistan after completing his tenure.

On behalf of Head of Diplomatic Missions in Islamabad and their spouses  Ambassador. Alashabi presented the traditional gift for outgoing colleague  to Mr. Andreas.

The acting dean expressed to Ambassador Andreas from his behalf and on behalf of the Heads of Missions’ thanks and appreciation for his cooperation, friendship, and wished him and his spouse good health, happiness and success in the years to come.

The Greek ambassador during his tenure in Pakistan contributed greatly towards promotion and further strengthening of bilateral relations between the two friendly countries.

Ambassador Andreas particularly focused on strengthening of people to people contacts with a special emphasis on facilitating the Greeks of Pakistani origin and Pakistani families wishing to reunite with their family in Greece.

« Uproar in Sindh Assembly as PPP passes amended LG bill (Previous News)
(Next News) Why Does Iran Look towards East? »