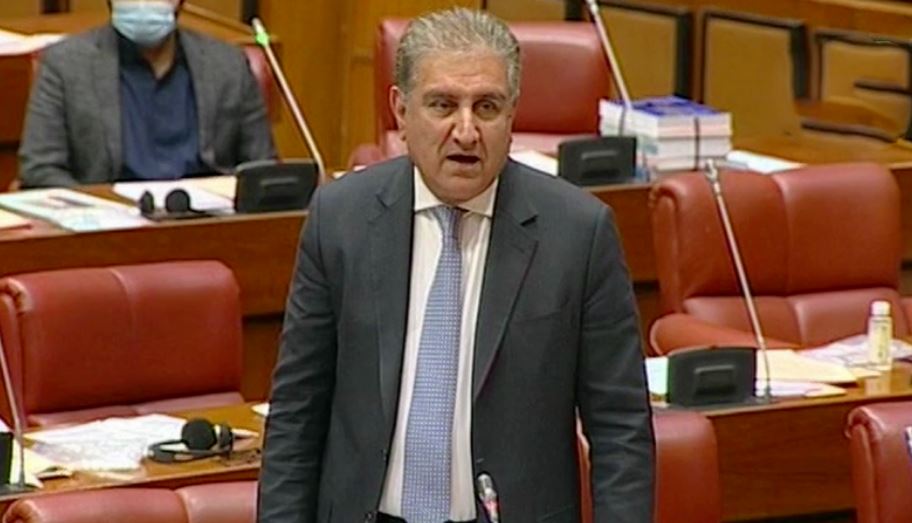 ISLAMABAD: Foreign Minister Shah Mahmood Qureshi on Tuesday launched a blistering attack on the opposition benches, taking aim in particular at Leader of the Opposition in the Senate Yousuf Raza Gilani, calling him a “compromised leader” and a “sell-out”.

PPP’s Gilani was among at least eight opposition senators who had skipped last Friday’s Senate session, which allowed the PTI government to narrowly manage to get the crucial State Bank of Pakistan (Amendment) Bill passed from the opposition-controlled house — a development that had raised many eyebrows. Information Minister Fawad Chaudhry, in a satirical tone, had even thanked Gilani for indirectly supporting the government.

Gilani, in his own Senate speech on Monday, said that he was being accused by “some turncoats” in what was an apparent reference to Qureshi and Chaudhry’s past as both are former leaders of the PPP.

Speaking on the floor of the Senate today, Qureshi responded to Gilani’s jibe, saying: “I am warning you, honourable members of the Senate, [that] the opposition leader is a compromised leader … don’t rely on him […] a leader of the opposition who is a sell-out.”

Qureshi wondered why the opposition could not see other experienced politicians such as PPP Senators Raza Rabbani and Sherry Rehman in its ranks for the leadership role.

He accused Gilani of being elected a senator through “buying votes”, saying there were videos of Gilani’s son’s tampering votes in last year’s Senate elections.

He also hit out at the PPP, recalling how it had initially agreed with the PML-N to back Senator Azam Nazeer Tarar for the office of opposition leader but later reneged.

Qureshi also doubted that Gilani, who had offered to quit from his opposition leader position on Monday, would go through with his resignation. “He lied, he will remain and take back the resignation and remain stuck to this chair. This was a drama,” FM Qureshi railed repeatedly.

Gilani on Monday had pointed out that the agenda for Friday’s session was issued hours before it was slated to take place, arguing that lawmakers should have been given more time to discuss the legislation.

Qureshi today rejected Gilani’s excuse and slammed the opposition for being “unaware, clueless and naive” about the bill being tabled in the Senate when it was already passed by the National Assembly and dates had been set for negotiations with the International Monetary Fund.