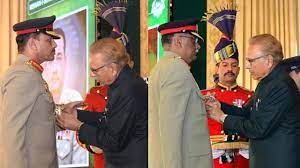 The new COAS and CJCSC were conferred with the awards in a special investiture ceremony held at the Aiwan-e-Sadar.

The generals took charge of their new posts after Prime Minister Shehbaz promoted them as generals and named them for the new offices.

Who is Gen Asim Munir?

Gen Munir was commissioned in the 23rd Frontier Force Regiment in 1986. He passed out with the 17th Officers Training course, Mangla and was awarded the coveted sword of honour.

Before taking charge, he was posted as the quartermaster general at the General Head Quarters (GHQ).

In 2018, Gen Munir was appointed as the director-general of the Inter-Services Intelligence (ISI) and later transferred as corps commander Gujranwala.

Who is Gen Sahir Shamshad Mirza?

Gen Mirza hails from the Sindh Regiment and has had an impressive career in the army, particularly in senior leadership positions during the past seven years.

Moreover, Gen Mirza was closely involved in the Quadrilateral Coordination Group that brokered intra-Afghan talks involving Pakistan, China, Afghanistan and the United States. He was also a member of the Sartaj Aziz-led committee on reforms for Gilgit-Baltistan.