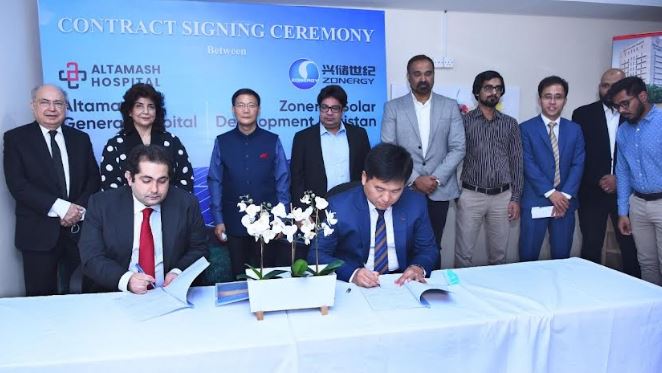 Karachi : /DNA/ – China and Pakistan’s partnership in renewables will be very helpful in fast conversion to green energy as latter has huge potential and can benefit a lot from technology and expertise of China. More Chinese companies are ready to operate here in energy sector, mainly in renewables, if Pakistan further fine tunes investment policy and incentives.

Chinese Consul General in Karachi Li Bijian, while speaking as the chief guest at MoU signing ceremony here at Altamash General Hospital Clifton said that for achieving sustained development goals (SDGs) China had made huge progress in green energy as this is future of the world. China had largest renewable energy resources and cutting-edge equipment and machinery. Pakistan was also making every possible effort for conversion to green energy. It has big potential of renewable energy with Sindh’s better position in solar.

Chinese Consul General said, “ I am very impressed by the quality and quantum of medical equipment at Altamash General Hospital.”

He acknowledged Altamash’s health services to the humanity, especially to low income group people. Today, he said, Altamash Group has taken a step forward for conversion to renewable energy.

Being the fastest and tested friends, and big partners in various social and economic sectors, under CPEC China and Pakistan were also increasing their cooperation and partnership in energy sector especially in renewables, which was the only future solution.

For last couple of decades, the two countries had been working together in energy sector i.e. solar, wind and coal power generation.

“My government is committed for renewables,” he reaffirmed. He described Zonergy as one of leading solar energy companies of

China and appreciated the company’s contribution in promoting green energy.

During a media chat there, Chinese diplomat congratulated

Pakistanis on celebrating their “Pakistan Resolution Day “ and

“ We are following the conference very closely, which concluded with

a historic declaration,” he said adding that for the first time

Chinese Foreign Minister was invited as the Special Guest to attend

increasing cooperation with the Muslim countries.

Li Bijian said Pakistan is a great country created under the

leadership of Quaid-e-Azam Day Mohammad Ali Jinnah. The people of

Pakistan had honor of tremendous achievements on social and economic

fronts. Pakistan is the leader of Islamic countries.

China and Pakistan stood together and had to resolve many social

and economic issues for the good of both the peoples, for the region

“ We can play a big role in peace and economic development,” he reassured.

group was devotedly working for long to provide better and less

expensive health cover to the people of Pakistan, mainly of Karachi.

from traditional sources of energy and a move towards green energy.

More such projects were expected in future, he said.

Hong Chang said that his company was successfully operating in

Pakistan since 2013, with solar energy projects in different areas

including Bahawlpur and Karachi. So far 400 MW capacity projects were

completed and more were in pipeline. And, total investment of the

company in Pakistan figured dollars 500 million. It had 200 employees,

of them 195 were Pakistanis.

He was happy to operate in Pakistan as solar energy generation