I can no longer remain quiet on dual standards of accountability in Pakistan: Nawaz Sharif 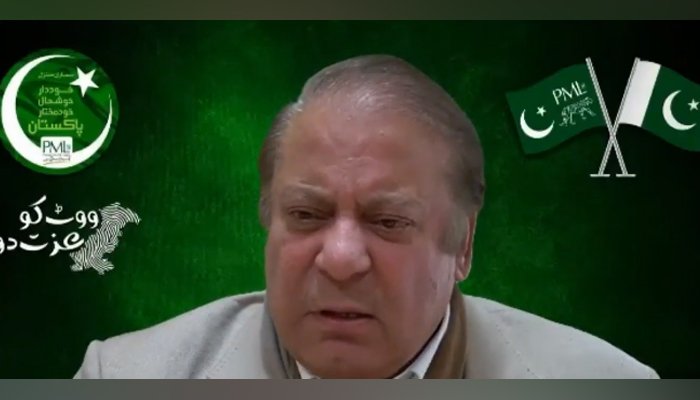 Former prime minister Nawaz Sharif on Thursday called out the incumbent government for what he termed its “dual standards of accountability”, saying that he can “no longer remain quiet” on the matter.

He was addressing a PML-N central working committee meeting via a video link from London.

“Nawaz Sharif is not made of the kind of stuff that can stand remaining quiet on dual standards of accountability,” he said, adding that “no one should try to silence him”.

As he began his address, he spoke of how it had been a long time since such an address had taken place. “I am addressing you all after a long time. And in these two-and-a-half years we have all endured much.”

“But it is with God’s grace we are seeing each other now,” Nawaz said.

“When I look at the state the country is in, it saddens me deeply,” the former prime minister said. “We were on such a great path to progress and look at where we are now.”

Nawaz said he sees a world of a difference between the Pakistan of a few years ago and the one before us now. “I do not understand why this has happened.”

“Me and my team who are sitting here and also those not here, such as Shahbaz Sharif who is in jail, paying for crimes not committed. Together, we were changing the fate of Pakistan.”

“These are not empty words, you yourself have witnessed the fruits of our efforts,” Nawaz said.

The PML-N supremo then began to list the “great achievements won” during the three years he was in power.

“We installed power projects, eradicated terrorism, the economy was soaring high, poverty was diminishing, gas was plentiful and people were employed,” he said.

Nawaz said Pakistan “was looking to join the G20 countries”. “We had become a tiger in the South Asian region,” he said, adding: “The world was praising our progress.”

“This is not me who is saying this. You all bear witness to this. The entire nation.”

He criticised the PTI’s Bus Rapid Transit (BRT) project in Peshawar, saying it has yet to actually take off despite the passage of six years.

“The buses burn, or the roof collapses, the lifts don’t work and how much did it all cost?

“Our BRT projects — Lahore, Islamabad, Rawalpindi and Multan — all costed less than Peshawar, in my estimate, and they are all working,” Nawaz said, adding that he can say with certainty that “no one would have seen such speeds that were witnessed in the projects PML-N completed”.

“Were these jinns who were doing this? It was us,” he said, as he highlighted PML-N’s various “achievements” over the years.

Nawaz said the PML-N had kept the rupee rate “under control for four years” and claimed the party “would have brought it down below Rs100 per dollar even had the party come into power”.

He said that similarly, the prices of essential commodities were maintained. “We had left sugar prices at Rs50, whereas now they have doubled to Rs100.”

“If you cannot answer this question then ask those who are going hungry […] they can either eat or go to school or pay their electricity bills or buy medicines which are far out of their reach now.”