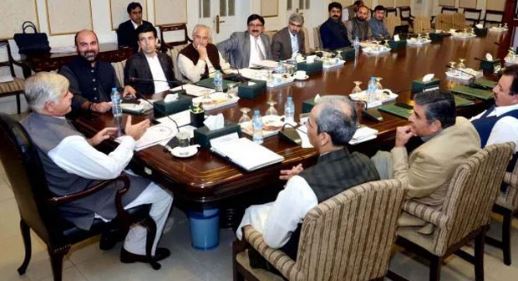 From Our Correspondent
PESHAWAR The Khyber Pakhtunkhwa Cabinet in its 68th meeting held here on Tuesday with Chief Minister Mahmood Khan in the chair approved Rs.2.552 billion as subsidy under the Ramazan Package to ensure uninterrupted supply of the edible items to the consumers on subsidized rates during the forthcoming Holy month of Ramazan. As many as 2800 sale points have been established the province over, which will be provided Aata three times a day to avoid any shortage of this essential commodity. The 20 kg bag of Aata will be available at these points at a subsidized rate of Rs.800 instead of Rs.1100 during the Ramazan and the additional financial burden to be incurred in this regard to be borne by the Provincial Government. The subsidized Aata will also be available in bags of 10 kg for the ease of the consumers at a price of R.400 pr bag. The meeting besides the cabinet members was also attended by the Provincial Chief Secretary, Senior Member Board of Revenue and Administrative Secretaries of various Government Departments. Special Assistant to Chief Minister Khyber Pakhtunkhwa on Information & PRs Barrister Muhammad Ali Saif while briefing media persons about the decisions of the cabinet meeting at ITLA’A Cell informed that the cabinet also decided to set up 123 Ramazan Facilitation Centers, 42 mobile utility stores, 83 sasta bazars and 96 ‘Ramazan Dastarkhwans’ during the upcoming Holy month, which will be supervised by the monitoring units headed by the respective Secretaries and Deputy Commissioners to ensure quality and thwart hoarding, price hike as well as shortage of the essential commodities in the markets.  The provincial cabinet, he said, also approved granting the status of force as well as Shuhada Package to the field employees of Forest & Wild Life Department. Under the Shuhada Package, the heirs of the martyred employees of Scale 3-16 to be given Rs.3.3 million, Rs. 5.5 million to BS-17 employees, Rs.9.9 million to BS-18 & 19 employees and Rs.11 million to BS-20 employees. However, the Chief Minister directed for devising a uniform financial package for the martyred ones as all the Shuhada are equal and a summary to this effect be presented in the cabinet in future. Barrister Saif further said that the cabinet also approved regularization of more than four thousand employees of as many as 26 projects of the Rescue-1122. The cabinet also approved the Tooling Policy for Highways. The cabinet, he said, approved the reopening of De- radicalization Center Mashal in Malakand Division to get rid of the scourge of extremism as well as to inculcate the spirit of patriotism in those having tendency towards radicalization. The center, for which a supplementary grant of Rs. 360 million too was approved, will serve as a training and reformation platform for eradicating negative tendencies among the people and will protect them from falling prey unintentionally in the hands of anti-state elements. The SACM further told that cabinet conditionally approved a subsidy of 50% per fertilizer bag for the major Kharif Crops during the year 2022-23. He went on to say that the meeting approved the transfer of 8 kanal and 3 kanal 7 marla state land to the Police Department for establishing police stations in Loi Sam Khar Bajaur and Tehsil Headquarters Ambar Mohmad District respectively. Similarly, the cabinet also approved the transfer of land to Relief Department for the establishment of Rescue-1122 stations in three different districts of the province. A land measuring 4 kanal has been allocated for the establishment of Rescue-1122 stations at Moza Daraban, Tehsil Daraban Distric D.I.Khan while 3 kanal in Kohistan Upper and more than one & half kanal at Moza Fathima Khel Kalan Tehsil & District Bannu. The provincial cabinet, he said, also approved granting the status of Sub-Division to Tehsil Shabqadar, District Charsadda and Tehsil Baffa, District Mansehra.The provincial cabinet approved a supplementary grant of Rs.700 million for Pak-Austria Institute of Applied Sciences & Technology Haripur. The cabinet also approved converting the Swat University Campus in Shangla to a full-fledged University namely ‘University of Shangla’ and the adjacent unutilized building of Technical College to be transferred in the name of the University. The cabinet also approved 10 kanal lands in Urban areas and 20 kanal lands in Rural areas for the establishment of Government Colleges ‘General & Commerce’ for Boys and Girls.The provincial cabinet approved handing over various roads in the province to the Khyber Pakhtunkhwa Highways Authority including one & a half km road between Sheringal – Patrak in N-45, 12 km road Bandagai Chowk – Jail Chowk, 126 km road Topi – Buner, 85 km road Thakot – Darband in Torghar and 61 km road Bannu – Miranshah. The SACM further said, the cabinet approved the upgradation of Tehsil Tirah Bagh Maidan to the status of Sub-Division and creation of two new tehsils, Painda Cheena in the new sub-division Tirah and Fort Salop in the existing sub-division Bara, District Khyber. The cabinet directed for returning the upgradation case of the Administrative Staff of Abdul Wali Khan University, Mardan to the University as the University is competent to take approval from the relevant forum in such like matters. The cabinet reviewed the regularization case of project employees of TMA Khar Bajaur in light of the orders of Peshawar High Court Mingora Branch / Darul Qaza, Swat and recommendations of the sub-committee constituted by the cabinet under the leadership of Local Government, Elections & Rural Development and decided to send it to the Local Council Board for being the relevant competent authority to take decisions, Barrister Saif concluded.