Bilawal criticizes PM for his tirade against the EU 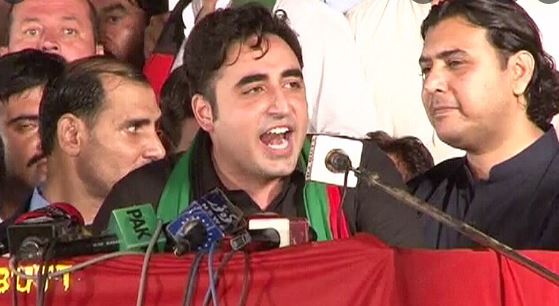 GUJRAT/LALAMUSA: Chairman PPP Bilawal Bhutto Zardari on Monday criticized Prime Minister Imran Khan for his tirade against the European Union ambassadors’ letter, which they had demanded of the Pakistan govt to condemn the Russian invasion of Ukraine.

He said these Pakistanis are sending in huge foreign exchange. Severing of relations with the EU states would damage Pakistani economy, he added.

He  said that the warm welcome of Long March by the people of Gujrat had shaken the Government House of Islamabad. PPP Chairman Bilawal Bhutto Zardari here on Monday issued a 24-hour ultimatum to Prime Minister Imran Khan to immediately step down from his office, dissolve the assemblies and conduct free and fair election as the opposition party marches towards Islamabad to dislodge the government.

He said: “If you have the courage to dissolve assemblies before we arrive in Islamabad, come down in fresh polls and compete with us; you will get to know the public’s response,”Bilawal reiterated his onslaught against the government’s IMF deal, alleging that such an agreement was the reason for the spike in petroleum prices, electricity tariffs and basic commodities’ prices. He claimed that the PM Imran Khan was panicking, which was reflected in the derogatory remarks he was using against the opposition leadership. The PPP chairman claimed that his party had steered the country “out of the crisis” during their rule. He accused the government of providing relief to the rich instead of the poor.