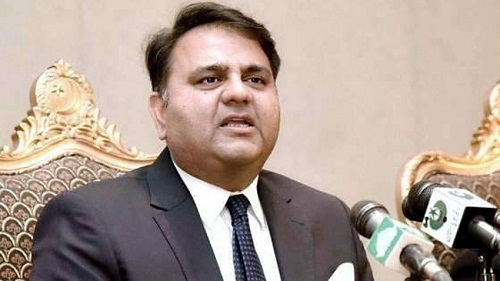 ISLAMABAD: /DNA/ – Pakistan Tehreek-e-Insaf (PTI) Senior Central Vice President Fawad Chaudhry said that the audio leak, featuring conversation between the then prime minister Imran Khan and Azam Khan, re-verified the PTI’s talks and existence of the Cipher, demanding that they wanted thorough investigation into the matter so as to bring the truth to the fore.

Speaking to media here on Wednesday, he said that the audio leak reconfirmed what they had been saying long ago.

He said that the audio talks also confirmed that Pakistani ambassador was summoned to hand over the cipher.

Fawad Chaudhary stated that the cipher was kept secret from the Prime Minister Imran Khan, adding that it was threatened in the cipher that the relation with Pakistan would get strained if the government was not removed through no-confidence motion; therefore the reaction was natural.

Fawad Chaudhary went on to say that the PTI wrote letters to the President and Chief Justice of Pakistan but even then the cipher was not investigated.

He demanded that after the audio leak, now the apex court should investigate the Cipher, adding that PTI was a political party and not an NGO; hence all political events were part of its narrative.

Fawad Chaudhary reiterated that the Cipher was confirmed in both press releases of the National Security National Council.

Talking about cyber security, he said that if Aminul Haq had been the IT Minister for four years, then one can imagine the seriousness of the cyber security.

Fawad said that he pointed out the cyber security issue in cabinet meetings that any hacker can easily intrude.

He stated that everything would become crystal clear only after the investigation of the letter, adding that more Indian hackers than Pakistanis could be involved in it.

Fawad Chaudhry stated that spying on Imran Khan was of no advantage because what he talked in the house said in the public.

He stated that this audio was different from the rest of the audios because its announcement was made through an official coordinator; therefore, Chief Justice should take immediate notice and announce investigation into of the audio leak.