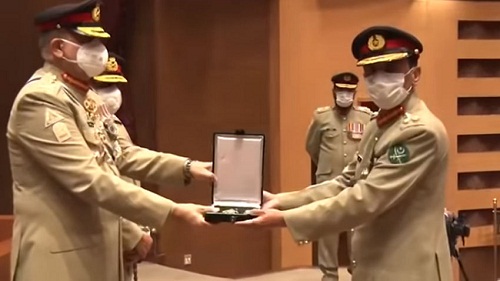 Rawalpindi : Chief of Army Staff General Qamar Javed Bajwa has said there is no cause more noble than laying one’s life for defence of motherland and sacrifices of our martyrs would not go waste.

The Army Chief was addressing at an investiture ceremony to confer military awards to Army personnel for their acts of valour and gallantry held at General Headquarters, Rawalpindi.

Chief of Army Staff General Qamar Javed Bajwa, conferred military awards on Army personnel for their acts of gallantry during operations and meritorious services rendered to the nation.

The COAS paying rich tribute to martyrs and ghazis said we owe peace and stability of our country to the selfless devotion and sacrifices of these officers and soldiers who are our real heroes.

The COAS lauded brave families of Shuhada for supreme sacrifices they rendered for the country.