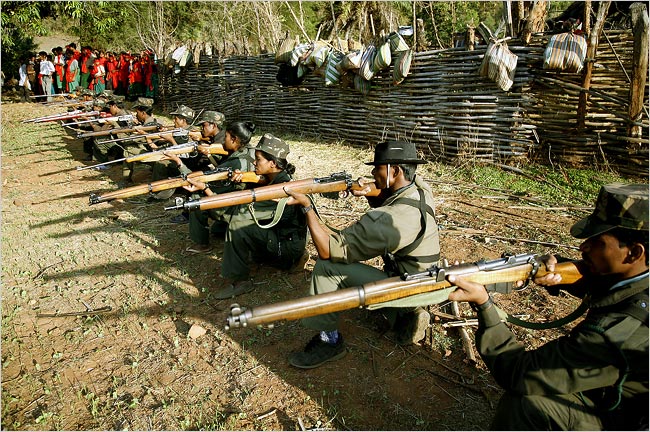 RAIPUR, 10 MAY, (DNA) – Maoist rebels have killed one hostage and released some 250 others in India’s restive Chhattisgarh state after capturing the villagers on the eve of premier Narendra Modi’s visit to the state, police said Sunday.
The insurgents rounded up the villagers late on Friday and marched them into the forests in impoverished Chhattisgarh’s Sukma district in protest against construction of a local bridge, police said.
“All villagers have been released [late on Saturday] except one who was killed at the hands of the Maoists,” District Inspector General S.R.P. Kalluri told media.
The victim was shot after he was “found guilty” of encouraging others to take part in the bridge building in Sukma, some 318 kilometres from state capital Raipur.
“He was found guilty at a kangaroo court and shot dead,” police sources said.
The Maoists had been protesting against the bridge, which they fear will give security forces easy access to their hideouts, according to local lawmaker Kawashi Lakma.
But the villagers had been defying Maoist orders to oppose it and even skipped meetings called by the insurgents, leading to a show of strength against them, Lakma said.
Hostage-taking is a common tactic used by the guerillas to force villagers to support their cause. The Maoists say they have been fighting for decades for the rights of tribal people and landless farmers.
Speaking in a neighbouring district on Saturday, Prime Minister Modi pledged government investment in the region, saying development for all would help end the bloodshed.
“Violence has no future … Don’t get disheartened. The macabre drama of death will end soon,” Modi said after announcing a new railway network in the area and meeting children left orphaned by the violence.
The rebels have been fighting against Delhi-government rule since 1967 for a communist society.
They draw recruits from tribal communities who are often desperately poor and living in underdeveloped areas neglected by successive governments.
The rebels are thought to be present in at least 20 states, but are most active in Chhattisgarh, Orissa, Bihar, Jharkhand and Maharashtra, occupying vast swathes of land.
Their insurgency has cost thousands of lives including through bombings and attacks on police and soldiers.
Critics believe attempts to end the revolt through security offensives are doomed to fail, saying the real solution is better governance and development. DNA
=========