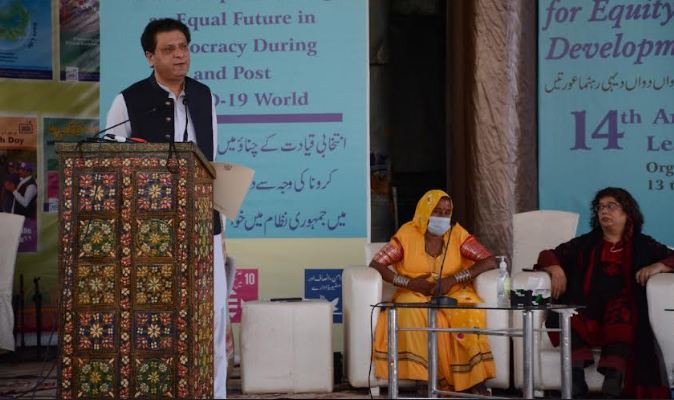 ISLAMABAD, OCT 15 /DNA/ – The speakers at the concluding policy session of the 14th Annual Rural Women Conference were of the view that the shift in women’s political role promises their economic freedom.

To celebrate International Rural Women Day that is being observed every year on 15th of October, PODA-Pakistan organized the 3-day conference to voice rural women’s concerns which were translated in to the conference resolution.

The conference participants urged the government to ensure women’s equal participation who are vastly underrepresented in local and national assemblies.

Tariq Malik, Chairperson of National Data Base and Registration (NADRA) identified that there was an inherent unofficial bias of the implementers in the system to compel married women to adopt their husband’s names after marriage. “There is no such binding in the law that requires women to adopt a certain name. It is upto women to adopt their maiden names or change their names after marriage.We are all set to remove this algorithmic gender bias,” he added. The chairperson also lauded efforts of Qamar Bano who supported NADRA to register 5000 Hindu women in Jacobabad, Sindh. He also informed the audience that they have also taken measures to register minorities comprised of Hindus, Jews, Christian, Sikh, and Dalits.

“ID card is just not mere a plastic card, it protects not only human rights of women, but also empowers them to be beneficial from the governments’ policies and steps.  After my joining, within 100 days we have reduced the existing registration gap between women and men from 14 percent to 10 percent. We have taken revolutionary steps to increase women’s registration to empower them and protect their rights. To ensure this, an inclusive registration unit has been setup that is working rigorously to increasewomen registration. The unit is reviewing all polices to enhance women registration whether is it linked with awareness or outreach.  Also, within few months, approximately 40 million households have validated their family members through our dedicated service 8009. Through this service a stranger can be identified in your family,” Tariq Mailk added.

Luke Myers, Head of Aid, Canada High Commission in Pakistan stressed on the point to avoid token representation and participation of women and urged the guests to replace it withgenuine commitment to resolve their issue with pragmatic gender-sensitive policies. “The upcoming local governments’ elections provide women an opportunity to women to take active role both as candidates and voters to have a strong voice and agency in shaping their communities with concrete and substantive actions,” he added.

Luke Myres was of the view that to deal with the impacts of climate change, which is affecting rural women in particular, it is best to strengthen economic resilience of women.

PODA-Pakistan has dedicated the conference to a rural woman leader Naziran Jamali from Naseerabad, Balochistan who has died recently. Her daughter, Amna Jamali was honoured during the concluding ceremony. Amna Jamali urged the chairperson NADRA to extend facilities and services to women of Balochistan who are deprived of their basic rights.

Representative United Nations Development, Program (UNDP), Mr. Darren also applauded the efforts of the organizers who provided a platform to rural women to voice for their basic rights.

Mr. Darren said that it is the foremost duty of all to get registered with NDRA for participating in electoral processes. Fauzia Tariq, Senior Gender Adviser, International Foundation of Electoral Systems-IFES moderated the session.

“Political process without women’s equal participation is incomplete,” said Zafar Iqbal Special Secretary Election Commission of Pakistan. “If half of the population is not participating in the political process actively, it raises questions on the credibility of the process. ECP is committed to ensure women’s political rights under the article 25 of the Constitution of Pakistan,” Zafar Iqbal opined.

Abdul Hafiz, Director Local Government, Election Commission of Pakistan also elaborated details of amendments in laws of local government system in Punjab. He told that in recently held cantonment elections out of 1559 contestants, there were only 19 women. Only 2 women won election. However, later one was disqualified, he informed.Nighat Siddique, Additional Director Gender, ECP and Zafarulalllah Khan, Constitutional Rights, Expert also spoke on the occasion.