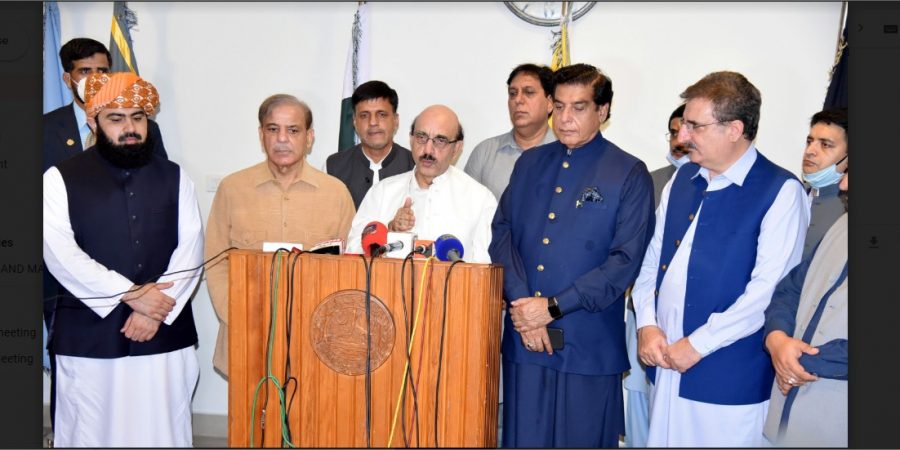 MUZAFFARABAD, August 7: A parliamentary delegation led by President Pakistan Muslim League (N) and the Leader of Opposition in the National Assembly, Shahbaz Sharif called on the AJK President, Sardar Masood Khan here on Friday, and expressed solidarity with the people of Illegally Indian Occupied Jammu and Kashmir struggling for their freedom and right to self-determination.

Talking to media after meeting, the AJK President Sardar Masood Khan thanked members of the delegation for visiting Muzaffarabad, and expressing solidarity with the people of Occupied Kashmir and AJK.

He said that the visit of the Pakistani opposition parties would not only reinvigorate the efforts for the unity and solidarity in the country but it would also send a very positive message to the besieged Kashmiri people on the other side of the Line of Control.

He maintained that recently, the Pakistani Prime Minister had also addressed the Azad Jammu and Kashmir Legislative Assembly, and had conveyed a message of solidarity, while today the Leader of the Opposition did the same, and put across a message that in Pakistan both opposition and government are unanimous in extending wholehearted support to the people of Kashmir.

The AJK President said it is a matter of great satisfaction that the political forces of the country are on one page on the issue of Kashmir despite their variances.  The people of Kashmir, he said will continue their struggle until they achieve their inalienable right to self-determination and the day is not far off when their heroic struggle will crown with the success and their sacrifices will bear the fruit.

Sardar Masood Khan also expressed his deep gratitude to other political parties of Pakistan who had always made Kashmir issue a rallying point.

On this occasion, the PML-N chief Mian Muhammad Shahbaz Sharif said that all political forces of the country are united on the issue of Kashmir, and today he had visited Muzaffarabad with a parliamentary delegation to send a message of solidarity, unity and love to the elders, youth, women and children of Occupied Kashmir who are engaged in the matchless struggle for the liberation of their motherland.

He assured that 220 million people of Pakistan stand by their Kashmir brethren, and they are ready to offer all kind of sacrifices to make the Kashmir’s liberation movement a success.

Asserting that the people of Pakistan consider brethren in IOJK as part of their body and soul, Shehbaz Sharif said that the hearts of Pakistani people throb with them.

Earlier, during his meeting with the President of Azad Kashmir, former Prime Minister of Pakistan Raja Pervez Ashraf said that his party PPP has a long association with Kashmir and previous governments of the party had raised the voice of Kashmiri people all over the world and had kept the nation together on the issue.

Leader of Jamiat Ulema-e-Islam and Member National Assembly Asad Mehmood said that his party has the honour of chairing parliamentary Kashmir Committee in the governments of PPP and the PML-N and effectively highlighting the Kashmir issue at the national and international levels.