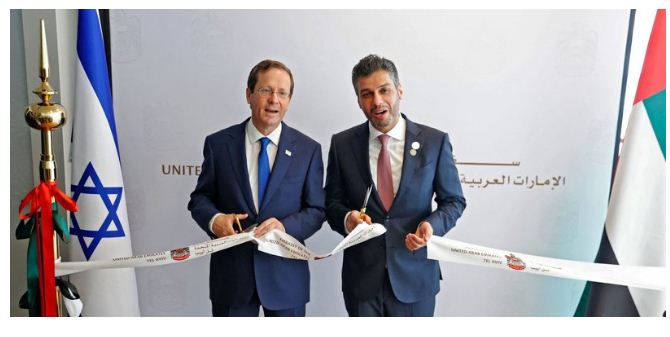 The venue in the heart of Israel’s financial district highlighted the central role economic cooperation has played since the UAE became only the third majority-Arab country to recognise the Jewish state.

At the ceremony, attended by new Israeli President Isaac Herzog, Emirati ambassador Mohamed al-Khaja called the embassy opening “an important milestone in the growing relationship between our two countries”.

“The UAE and Israel are both innovative nations, we can harness this creativity to work towards a more prosperous and sustainable future for our countries and our region,” he said.

Herzog called for the “historic agreement” with the UAE to be “extended to other nations seeking peace with Israel.”

Israel and the UAE have signed a raft of deals — ranging from tourism to aviation to financial services — since normalising ties as part of the so-called Abraham Accords brokered by former US president Donald Trump’s administration.

Wednesday’s ceremony, held in the lobby of the stock exchange building two floors below the embassy, came after Israeli Foreign Minister Yair Lapid made a landmark visit to the UAE last month, opening an embassy in Abu Dhabi and a consulate in Dubai.

The Palestinians were outraged by the UAE’s decision to establish ties with Israel, which broke with decades of Arab consensus that there should be no normalisation of ties without a comprehensive and lasting peace between Israel and the Palestinians.

But Israel and UAE have sought to emphasise the economic dividend offered by normalisation.

Lapid told Emirati media last month that bilateral trade has reached over $675.22 million since the signing of the Abraham Accords in September 2020.

Lapid was an architect of the coalition that ousted Netanyahu last month, but has, along with Prime Minister Naftali Bennett, vowed to keep up Netanyahu’s policy of pursuing deeper ties in the Arab world.