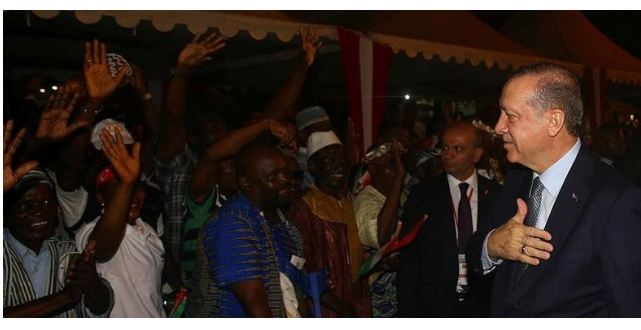 As part of the visit, business forums by Turkey’s Foreign Economic Relations Board (DEIK) will be held in Angola on Monday and in Nigeria on Wednesday.

The forums will discuss business opportunities and will see B2B meetings between private sector representatives.

As decided at the Turkey-Nigeria Joint Economic Commission Meeting on Oct. 8 in the capital Ankara, Turkey and Nigeria will seal three deals in the hydrocarbon, mining and energy sectors during Erdoğan’s visit.

Speaking to Anadolu Agency, Hakan Özel, head of the Turkey-Nigeria Business Council of the DEIK, said business circles are cheered by Erdogan’s visit.

“As business people, we feel that we are not alone,” Özel added.

Stressing that the bilateral trade volume falls short of its potential, Özel said: “Nigeria’s imports from the world is nearly $60 billion, but from Turkey it is around $600-700 million. In this regard, our president’s visit means a lot for paving the way for raising this figure further.”

Almost every product manufactured in Turkey is an import item for Nigeria, Özel highlighted, adding that there is a rising “made in Nigeria” wind in Africa in recent years.

Nigeria’s desire to switch from import to domestic production creates an investment area for Turkey who has a strong small and medium-sized enterprises (SMEs) structure, he said.

“With a good structuring, an investment such as establishing a small industrial zone can be done by Turkey in Nigeria,” Özel suggested, adding that this can make Turkey one of the most prominent trade partners of the country in the next 4-5 years.

Abdullah Eriş, head of the Turkey-Angola Business Council of the DEIK, said businesses expect that the current problems will be resolved as a result of the visit and the commercial diplomacy between the two countries will increase.

“This is the first official visit to Angola by President Erdogan,” Eriş highlighted.

Turkish companies can contribute to Angola’s economy in sectors such as construction, food, banking, agriculture, textile and energy, therefore they are focusing on them, he said.

The two countries have a bilateral trade volume target of $500 million by 2023, Eriş recalled.

Touting to the deals recently signed between Turkey and Angola, such as protection of mutual investments and visa-free travel for exporters, Eriş said business circles wait for them to enter into force soon.

“During Erdoğan’s visit, there will be a signing ceremony of three Turkish private companies on the investment projects in Angola,” Eriş noted.

“The agenda of DEIK, which continues its commercial diplomacy activities to boost Turkey’s investments and trade with 147 business councils around the world, focuses on Africa,” Nail Olpak, the head of DEIK said.

Following the visit, he noted, the third edition of Turkey-Africa Economy and Business Forum (TABEF) will be held in Istanbul on Oct. 21-22 with an attendance of 2,000 business people.

The event, organized by Turkey’s Trade Ministry and the African Union in coordination with Turkey’s Foreign Economic Relations Board (DEIK), aims to enhance trade and investment ties between Turkey and Africa.

“The biennial forum aims to initiate a dialogue between Turkish investors and the African Union and regional economic communities, thereby strengthening investment relations between Turkey and Africa,” Olpak underlined.

The event will provide opportunities for Turkish and African business circles to discuss business models that can be applied in the current crisis environment, strategies to revive economies and solutions for the post-pandemic period, Olpak said.

The main themes of TEBAF will be energy, infrastructure, technology and digitalization, tourism, agricultural production and manufacturing industry.

“The theme of ‘investment’, on the other hand, includes further deepening of the win-win relations between Turkey and Africa,” Olpak explained.

While the trade and economic ties between Turkey and Africa made rapid improvements in recent years, the trade volume jumped to $25.3 billion.

Turkey’s bilateral trade volume with Nigeria stood at $2 billion, with Angola at $250 million and with Togo $153 million, according to Turkey’s Trade Minister Mehmet Muş.